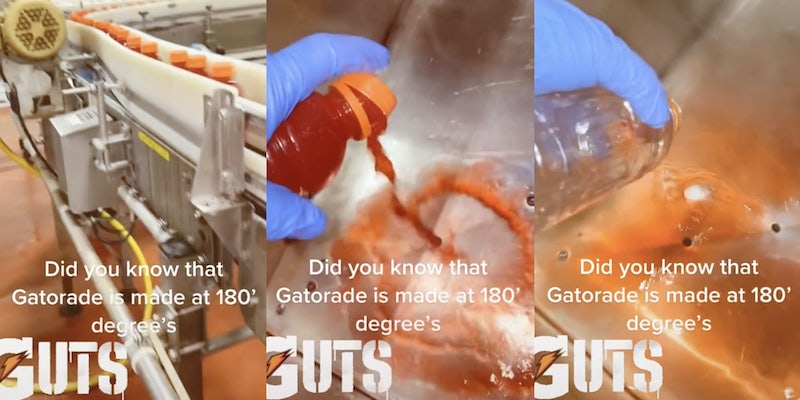 ‘No wonder it tastes warm even though it’s been in the fridge for 3 days’: Worker allegedly reveals how Gatorade is made in viral TikTok

'I needed this knowledge.'

German Lopez (@germanlopez141) filmed and posted the viral video, which now has 3.4 million views and 188,000 likes. In the video, Lopez opens a label-less Gatorade bottle and pours out the red contents into a sink. It appears to be the fruit punch flavor.

“Did you know that Gatorade is made at 180 degrees?” text overlay and a voice (via the app’s text-to-speech feature) questions viewers.

Viewers in the comments section expressed a plentitude of viewpoints about Gatorade, which was reportedly created in 1965 by a team of scientists at the University of Florida. Many of the comments focused on plastic consumption and taste.

“No wonder it tastes warm even though it’s been in the fridge for three days,” one commenter joked.

“Great straight into plastic bottles for enhanced microplastic consumption,” another said, to which Lopez responded, “It’s actually pasteurized temperatures to keep from all toxins and then cooled after.”

The Daily Dot reached out to PepsiCo, the owner of the Gatorade brand, and Lopez.