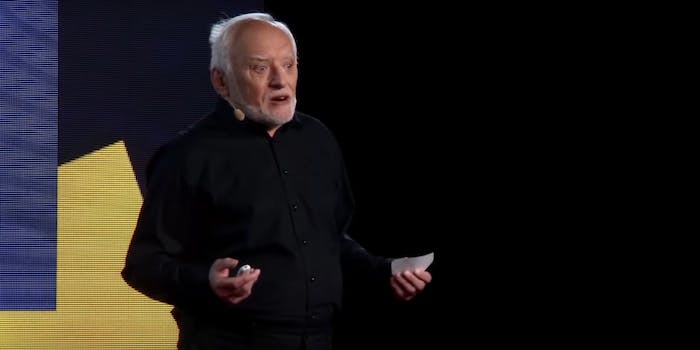 He gave the TEDx Talk in Kyiv, Ukraine.

“There are three rules to becoming famous,” András Arató says towards the end of his TEDx Talk. “Unfortunately, nobody knows what they are.”

It makes sense that Arató would feel that way about fame. He’s been a meme for almost a decade now.

Of course, you might know Arató better by the name given to him by meme makers: Hide the Pain Harold.

Back in 2010, Arató was living a simple life in Budapest. He was a retired lighting technician vacationing with his wife. Like most of us, Arató posted the pictures from his vacation to social media. It was there that they caught the attention of a photographer, who felt that Arató would be a perfect model for some stock photography. A few hundred pictures and several months later, Arató’s photos began appearing in ads for things like hospitals. Pretty normal stock photography stuff.

But something about Arató’s smile caught the attention of meme makers. It seemed a tad insincere, even forced. Meme makers decided that that smile was masking a deeper pain.

“Hide the Pain Harold” became a huge meme and millions of people are now familiar with Arató’s face. A fact that made him a bit uncomfortable at first.

Arató recently gave a TEDx Talk on his meme legacy in Kyiv, Ukraine. It was published on YouTube last week.

“My first reaction was, ‘let’s finish this, let’s disappear everything,'” he says during his talk. But of course, that was impossible. Arató realized that once your picture has become a meme, there’s no way to ever truly get it off the internet. So instead he decided to embrace his new-found fame. He has since traveled the globe and appeared in music videos and commercials.

“It’s much more enjoyable to make fun with young people than to listen to the medical complaints of my contemporaries,” he joked during the talk.

Arató is now comfortable with his meme status. He’s not making any money from it, but he says it’s spurred him to try new things, including taking up oil painting and becoming a disc jockey at a local radio station.