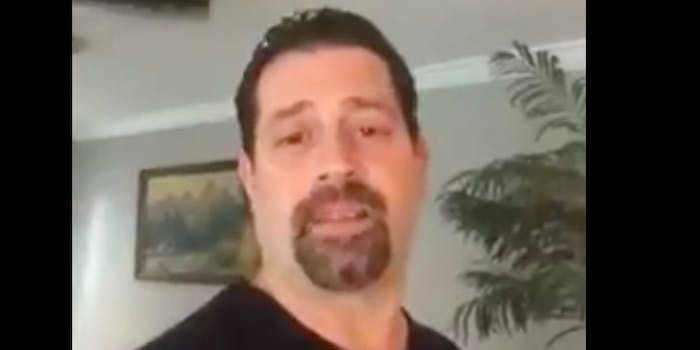 Twitter is creeped out by this ‘Good Morning Julia’ video

'Please erase him from your memory.'

Getting hit on by a guy is one thing, but receiving a two-minute video from the guy professing his love—after turning down his offer for a date—is something else altogether.

After a five-minute encounter with a man named Joe, a 26-year-old woman named Julia reportedly awoke to a video message on her phone.

“Good morning Julia. It’s me, Joe. Just wanted to say hi, and wish you a great day,” the man says in the video, recording selfie-style in what appears to be a living room.

“Getting to look at you was probably the greatest moments of my life. You’re so beautiful, you don’t know how beautiful you are to me,” he continues. “It’s been sitting in my mind that you said you wanted to get back with your ex-boyfriend. Please erase him from your memory.”

The final moments of the video end with Joe saying, “I look forward to going out to dinner with you, so let’s make it happen.”

My roommate’s cousin Julia went to a bar, got hammered, and woke up to this video texted to her the next morning pic.twitter.com/MP9EnrCbLF

While this now-viral tweet claims Julia awoke to this video after “getting hammered” at a bar the night before, Julia’s roommate Sarah, 25, was quick to correct the story.

“Julia’s my roommate!! They met for literally 5 minutes at the gym not at a bar which makes the video even more funny and creepy. Where did you even get this from?!?” Sarah tweeted to the original poster.

Julia's my roommate!!! They met for literally 5 minutes at the gym not at a bar which makes this video even more funny and creepy. Where did you even get this from?!?

Sarah quickly tweeted about the video on her account, receiving dozens of replies begging to know what really happened between Joe and Julia.

“It’s 7 am and I’m literally laughing so hard because people are trying to post the Joe video with the wrong story,” Sarah wrote, “and I’m just laughing cuz they don’t even know about the other two videos yet. #goodmorningjulia #letsgofullthrottle”

It's 7 am and I'm literally laughing so hard because people are trying to post the Joe video with the wrong story and I'm just laughing cuz they don't even know about the other two videos yet. #goodmorningjulia #letsgofullthrotle

A few hours later, the truth was unleashed.

A follow-up message shared an iPhone note detailing the experience:

“Julia’s gym requires you to sign your name before going tanning,” Sarah explained. “Joe saw her going to sign in, he then looked at her name when she went into the tanning room. On the way out, he followed her out yelling Julia wait! She stopped thinking she may know him. He then started hitting on her, and Julia explained she was attempting to get back with her ex. Joe then called himself from her phone and the next morning he sent the video. They never dated/never have seen each other since that day. No Uber story, no bar story.”

Sarah then shared the second video Julia received—which honestly may be worse than the first.

“Just wanted to say good morning Julia, my flower!” Joe says in the second video. “My precious. My soon-to-be my everything. Have a great day, love. Mwah.”

Other accounts posted the original video with varying stories about how Joe and Julia met. Another story floating around claims that Joe was Julia’s Uber driver who got her number from the app, but Sarah says that’s not the case.

“We just want to set the story straight about what actually happened,” Sarah, who preferred not to share hers or Julia’s last name, told the Daily Dot. “We always joked that it would go viral if we posted it, but he has two kids a few years younger than us so we didn’t want to post it. But when someone else posted it, we didn’t feel so bad.”

Sarah explained her and Julia, who live in Connecticut, have shared the video within their larger group text of girlfriends for some time. But they were shocked to see it appear on the Chive early Tuesday morning.

“After Julia initially freaked out from receiving the video, it ended up being a huge joke between all of our friends. We would film random people we met out/Uber drivers and shit saying, ‘Good Morning Julia,'” Sarah said.

Julia did not immediately respond to the Daily Dot’s request for comment.