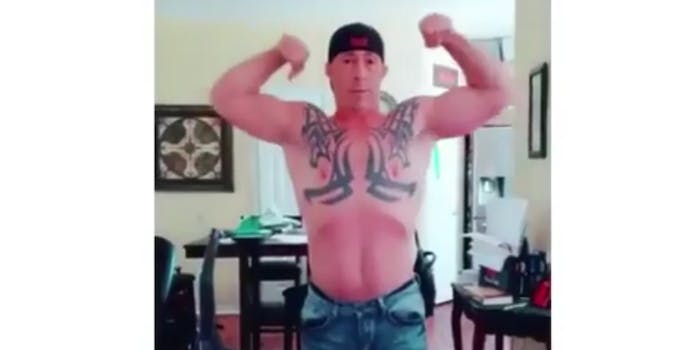 Screengrab via YouTube/Dan the Meme Man

Warning: This song will be in your head for weeks.

Why do good girls like bad guys? A new viral challenge started on music-sharing app Tik Tok has dozens of men sporting their geekiest—and then their most rebellious—outfits for a brief, funny video asking that exact question. Over and over.

Tik Tok, which absorbed Musical.ly last month, is rising across the world’s app stores. Like the defunct Vine, most of the content uploaded there is brief and shareable. Tik Tok encourages lip-synching or dancing to any of its vast array of sound clips. With Snapchat-like filters and cutesy special effects, it’s become a social media go-to.

This particular challenge pulls the audio from a 2012 emo song by Falling in Reverse called “Good Girls Bad Guys,” and has men lip-synch the first half of the chorus in their nerdiest attire, before revealing their “bad” side for the second half.

Even Ronnie Radke, the lead vocalist for Falling in Reverse, shouted out the challenge this month.

One video participating in the “why do good girls like bad guys” challenge comes from a group of 10 YouTube vloggers from Canada.

The members of the 10 Member Vlog Cabin, 10MVC for short, said they saw the challenge trending and were immediately spurred to participate. Their video features Trenton, one of the founders.

“We browse Musically and TikTok fairly regularly, because we are members at heart and always want to stay on top of the hottest trends,” they wrote in an email to the Daily Dot. “The first one we saw was of that guy who took his shirt off and started flexing with his tribal tattoos. At that moment, we knew we found something special.”

They weren’t sure where the trend started or who submitted the first video, though they did invite us to give them credit for the challenge. It seems to have originated organically this summer, with early 20-somethings who were scene kids in 2012 and have a nostalgic fondness for Falling in Reverse. Tik Tok is China-based and purchased Musical.ly in November; its Western users ballooned last month as Tik Tok absorbed it.

Whoever started it, this viral video trend is likely to stay in our memories for some time, if only because of the painfully repetitive chorus.