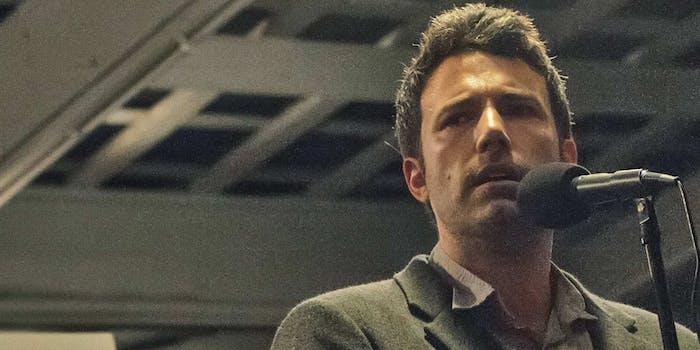 It might be the biggest little cameo in film history.

The Internet undeniably has a lot to say about Ben Affleck’s full frontal nudity in Gone Girl, director David Fincher’s adaptation of the best-selling Gillian Flynn novel. I’m not exactly sure why, though: If you sneeze or even squint your eyes, you’ll miss said penis. Its cameo may be the most brief in film history, and the level of attention Ben Affleck’s penis is getting, thus, highlights the way society is not accustomed to male nudity in mainstream media. It also illustrates just how shocked society is when men are treated as sexualized objects in the media, just like women are every day.

The level of conversation generated by Ben Affleck’s member hasn’t been seen since Michael Fassbender showed his bits and pieces in Shame, which Complex considers the most important moment in full frontal film history. (Before that it was Richard Gere in American Gigolo, released back in 1980.) Each one of these male nude scenes marked a powerful plot point or character development for these men. For Affleck, he enters a shower to ensure the truth is told to him while he is not wearing a wire; Fassbender plays a man with sex addiction; and Richard Gere played, well, a gigolo, so it would make sense to the audience that he would get naked in character.

It is important to note that rarely if ever is full frontal nudity with males shown in the heightened sexual way that women’s nudity is shown, as a form of fan service (i.e., “blatant nudity or sexual content for the sake of pleasing fans”) for panting heterosexual audiences. Shows like MTV’s Teen Wolf and CW’s The Vampire Diaries showcase shirtless men for their audiences, but even then the men showcased are archetypes of masculine beauty, with not an ounce of body fat in sight. They also never show the whole package.

However, the nudity in Gone Girl wasn’t explicitly meant for sexual purposes; instead, its purpose was to make the viewer slightly uncomfortable. Audiences were out of their element being exposed to a flaccid penis while Affleck’s Nick tried to make sense of his marriage. It’s rare that one would call a flaccid penis salacious or arousing, though. When Forgetting Sarah Marshall’s Jason Segel flashed millions of people, his mother sent out an email to family and friends that read: “I would like to inform you all that Jason has chosen to do full-frontal nudity… However, it is not gratuitous and is essential to the plot.”

In addition to the double standard on titillation, the appearance and treatment of male nudity also highlights the fact that MPAA ratings can be frustratingly vague and inconsistent. An NC-17 film is used to classify films that could be considered “pornographic.” Although a film like Sin City might slide by with an R, despite featuring the gratutious sexualization of women throughout, Shame got slapped with an NC-17 of death. This prompted viewers to wonder if it was because of the film’s ubiquitous (and well-publicized) depiction of the phallus, front and center in the conversation about the movie.

The difference between male and female nudity is, thus, clear: When men get naked it makes them vulnerable, when women get naked, more often than not, it’s to please the fantasies of male audience members. This double standard in the way films are rated heightens the gender inequality depicted in the media. Men are only able to see themselves naked on screen if it’s in a way that’s deemed “pathetic.” Otherwise, male full frontal is left out of the mainstream.

However, technology has begun to allow men to see all forms of themselves being represented in different aspects of media. Grindr has allowed gay men in particular access to other men who perhaps aren’t film stars, allowing them a forum in which they can view all types of men in various shapes and sizes. Websites like Tumblr are likewise allowing amateur nude photos of men to be posted in both sexual and artistic ways, opening up discussion on what a human body looks like. Elsewhere on the Internet, discussion boards allow young men and women to exchange Snapchat user-names in order to share naked images of themselves. Curiosity might have killed the cat, but for Tumblr and Snapchat users, it can be an act of liberation.