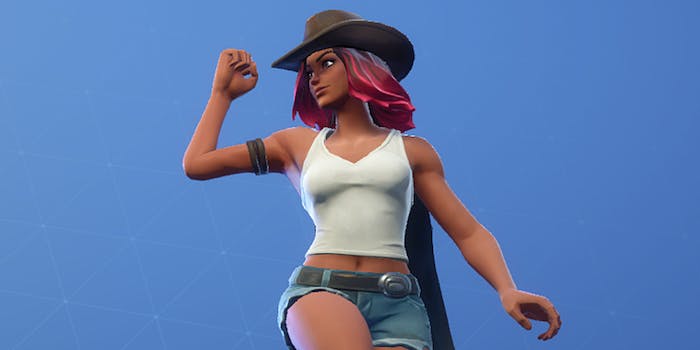 With the debut of Fortnite Season 6, a slew of new cosmetic items and skins were introduced as well. One is an awesome-looking female character clad all in black, who resembles a villainous “outlaw” with striking maroon hair, bandolier, and a duster with metallic accents that can be customized depending on player preference.

Her name’s Calamity, and while she starts out as a pretty plain-Jane character, you can upgrade her look by earning a few important upgrades that level her up quickly into a character that no one would want to trifle with. Much like this season’s Dire skin, which can transform into a werewolf, it’s an ever-changing and evolving look that people are excited to get their hands on.

Unfortunately, Calamity’s sweet outfit isn’t the hottest topic of discussion right now. It’s a breast jiggle animation that appears to have been implemented for the character, which demonstrates a slight bounce when the character is moving around, such as in the “Jubilation” emote pictured below. It seems to be the only emote that’s currently affected.

The most important thing in the Season 6 update pic.twitter.com/FrnzFsF1Fl

People can’t stop talking about it, of course.

HELL YEAH. Best emote in the game got even better 🎉

Epic Games rep issued a response to the matter to PC Gamer, stating that the feature was “embarrassing and unintended” via email. “We are working on a fix as soon possible.”

We have disabled elements of our animation system. This means you may see visual issues with some outfits. Thank you for your patience while we work through these issues!

It’s hardly embarrassing—this is, indeed, what real women’s bodies look like when they move, but it’s intriguing how this detail could possibly have been “unintended.”

It’s likely that Epic Games wants to retain its cartoony image given that such a large portion of its player base skews younger, though as a reminder it’s still a game meant for adults, which means it shouldn’t cause such a ruckus if racier elements are introduced when it’s the goal of each round to kill off other players and be the last one standing.

Look for Calamity to go stationary as soon as Epic Games can implement a fix to remove this animation soon.