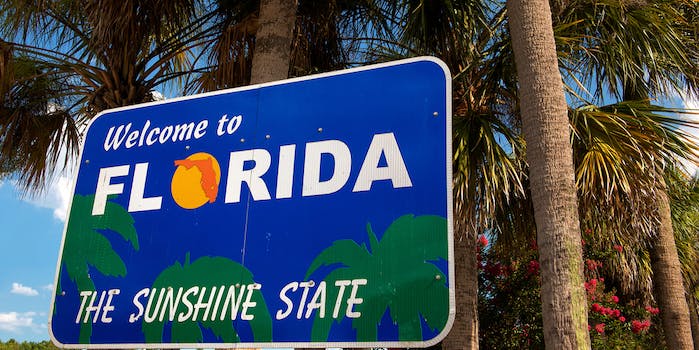 Just some PVC pipes, a sniper suit, and a sex machine. Nothing to see here.

Michael Presley Bobbitt is a Florida Man and playwright, whose play of the same name, Florida Man, is opening off-Broadway today, July 31. Written in reaction to the world’s leering fascination with the Florida Man headlines, Bobbit wanted to counter the “cartoonish picture that revels in the surface weird without digging down into the truly bizarre guts of this wild place.”

Florida Man, he says, “is a deep dive into a swampland culture where everyone is more than they appear.” On his way to New York with a suitcase full of essential props, Bobbitt inadvertently created the greatest promotional tool for his play: a letter to the TSA asking them to please not seize his bag full of props.

Florida Man the play opens one week from today if this bag isn't seized by the TSA.

Containing PVC pipes, a sniper suit, judge’s robes, a convict’s jumpsuit, a fake gun, and a sex machine, Bobbitt was understandably concerned that they might think he was some sort of “creepy terrorist pervert”. His offer of an “enhanced pat-down” in exchange for getting through security may not have been the best way to convince them otherwise, but the props made it through safe and sound and apparently gave the TSA agents a real laugh, as he detailed in an update to his original Facebook post:

My bag was flagged for additional screening because they saw the replica guns. These are totally allowed but they generally trigger additional scrutiny. I heard calamitous laughter going on behind the wall so I waited where they could come out and I could tell them it was mine. They said it was the best thing they had seen in as long as long as they could remember. All clear!

The letter seemed too good not to be a cynical marketing ploy, so we reached out to Bobbitt to ask him about it. Apparently, the letter and its concerns are genuine. The marketing element was just pure serendipity.

“I wrote the letter to the TSA in all seriousness,” he told the Daily Dot. “All of the items in that letter were in the bag and I had very real fears that they would not allow the bag through. The play could not go on without those items as I didn’t think I could find a new sex machine on short notice. It ended up being an extraordinary promotional tool that is spreading all over the country.”

The sex machine is homemade, by the way, which perfectly completes the Florida Man theme.