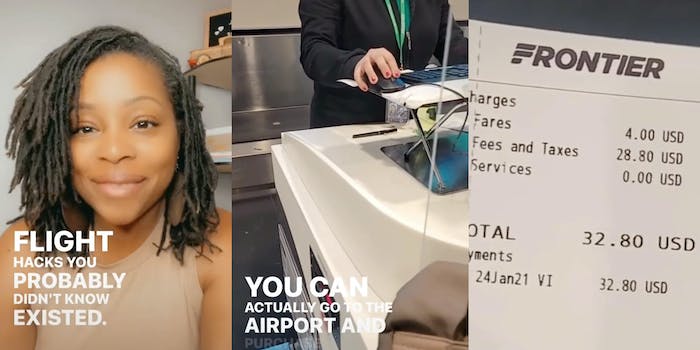 The TikToker shows the overall cost for her flight was a mere $4.

A TikToker’s brilliant flight hack is causing a stir on TikTok.

User @mcmillansonthego’s account is already littered with tips and tricks to save time, space, and money while traveling. This alleged hack sparked particular interest among viewers, however, due to its claim that travelers can save huge sums of money by simply buying their tickets at the airport.

It’s not as stressful as it sounds. As @mcmillansonthego explains in her TikTok, “you can actually go to the airport and purchase your tickets at the counter.” This doesn’t have to be for a same-day flight, either, as she explained in the comments. You can purchase future tickets at the counter and still manage the hack. The idea is stirring up interest on her page, as signified by the video’s notable popularity compared to many on her page, earning 763,700 views and more than 50,000 likes from curious, frugal viewers.

The hack only works with specific airlines, according to @mcmillansonthego. But airlines already known for their inexpensive flights, including low-cost carriers like Spirit, Frontier, and Allegiant, are likely to work for the TikToker’s flight hack. By purchasing your tickets at the counter, instead of online, @mcmillansonthego says travelers can save “up to $20, to $50, sometimes even over $100 off what you see online.”

She provides proof for this claim in the form of her own airline ticket. Flashing a Frontier Airlines ticket in front of the camera, @mcmillansonthego shows that her overall cost for her fare was a mere $4. Add the airline’s taxes and fees, and the overall ticket price rises—modestly, as airline tickets are concerned—to $32.80.

Viewers were stunned by the alleged hack and wasted no time in testing it for themselves. As noted by several commenters, and @mcmillansonthego herself, this flight hack will prove ineffective when tried on some of the bigger airlines in the U.S., like Delta and America. So long as you don’t mind an already cheap airline, however, you can use @mcmillansonthego’s advice to save big money next time you fly.

One viewer proved this by trying it themselves. User @paola.Oxx commented on the original video with a claim that they attempted the airline hack, and “it worked.” They managed to shift “$105 dollars down to $75 for two tickets.”

People were far less skeptical of the hack in the comments section for this video, with several other people also claiming to have tried and succeeded to get cheaper tickets via a quick trip to the airport. One user claimed that they “always save hundreds of dollars by buying tix at the airport.”

It’s even worth the (potentially) long wait and expensive parking, according to @mcmillansonthego. When one user questioned the cost-effectiveness of making a trip all the way out to the airport, paying for parking, and waiting in line when a ticket could be purchased online, @mcmillansonthego assured them that her hack was still worthwhile.

Other viewers pointed out that many budget airlines charge an arm and a leg for luggage, which makes up for the savings on the fare, but @mcmillansonthego has a hack for that too. She pointed curious viewers to another of her videos, in which she demonstrates how to cut down on the amount of baggage you need for a trip. A few people remained unmoved, mostly due to the inclusion of Spirit Airlines, but others were entirely convinced.

Based on the number of intrigued viewers in her comments section, Spirit, Frontier, and Allegiant are about to see some increased foot traffic in airports. If it pays off in the form of affordable tickets and increased passengers, it seems like a win for everyone.

Update 12:26pm CT: When reached for comment, @mcmillansonthego told the Daily Dot “she accidentally learned about booking tickets over the counter.”

“I was checking in a bag on a trip I was heading to and was on my phone and the agent at the counter asked what I was doing (which was looking up another flight) then she mentioned, you know you can book it here and save some money, I tuned in to what she said and it was history after that,” she said. “I tried this with all carriers I flew and learned who offered this and who didn’t. I learned that many people didn’t know about this hack, so I created a TikTok to share it.”