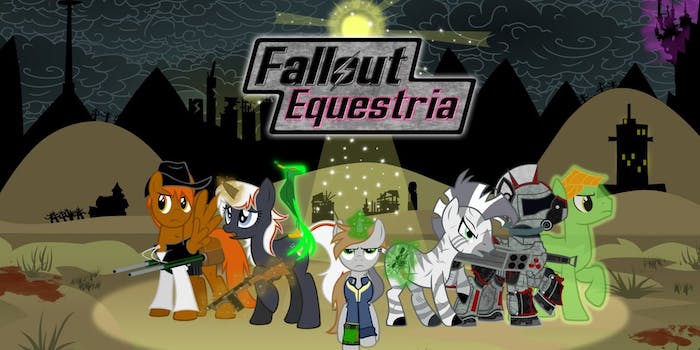 Behind “Fallout: Equestria,” the ultimate “My Little Pony” tribute

A look into the surprisingly massive realm of My Little Pony: Friendship is Magic fanfiction with reclusive author Kkat.

Bronies—adult fans of animated children’s show My Little Pony: Friendship is Magic (FiM)— are bound to set a record for the highest number of fanworks in the shortest amount of time.

Brony musicians are surprisingly prolific, creating entire albums in tribute to the program, and celebrated fanartists like Pixelkittes have followings nearly as big as the show’s. But neither medium can hold a candle to the massive world of brony fanfiction.

Brony fanfiction has become one of the fandom’s most lasting traditions, with adoring writers creating their own stories that take the original equine characters of the Friendship is Magic universe and portray them in new situations. Serial stories are updated chapter by chapter on brony news site Equestria Daily, where tens of thousands tune in for the latest installment. The site even offers a No-Fanfiction browsing mode for readers overwhelmed by the deluge.

“I think people are drawn to FiM fanfiction because of the way the characters are written,” observed Amanda Brennan, researcher for Know Your Meme. “They each have rich backgrounds that people want to delve into outside of canon.”

Graeme Pollard, the webmaster for one of the largest fanfiction hubs FiMfiction, told the Daily Dot that 30,000 individual stories are hosted on the site. Given that the fandom is around two years old, that’s roughly 40 new stories per day.

Even out of such a wide selection, there’s one story bronies regard as “the most popular fanfic out there without a doubt,” according to Know Your Meme Database Moderator RandomMan: Fallout: Equestria, written by enigmatic author Kkat.

Fallout: Equestria is a crossover between the cheery My Little Pony universe and the grim, realm of the post-apocalyptic video game, Fallout. In this unforgiving future, underachieving unicorn Littlepip must venture out from her underground fallout shelter into a violent world to search for her shelter’s most beloved performer, Velvet Remedy. With an introduction, epilogue, and 45 chapters in between, it’s one of the longest brony fan works, as well as the most popular.

Simply put, the fanwork has inspired its own fandom. It has its own page on TV Tropes, an encyclopedia of recurring themes in pop culture. Fallout: Equestria has a  fan-maintained wiki spanning hundreds of pages, full of facts and definitions placed by avid readers, many of whom have also created related fanfics and fanart. A team of bronies worked together to get the story its own hardcover edition, of which at least one of the show’s voice actors, Tabitha St. Germain, has acquired.

For all the fame that comes with being brony fandom’s most celebrated author, however, Kkat is downright mysterious. Communicating with the Daily Dot through email, Kkat wouldn’t reveal a personal location or even gender. The few times Kkat has been interviewed by bronies, the interviewers read Kkat’s answers or use a computerized voice to preserve the author’s privacy.

“I’m a private individual, and I do not wish to put my personal information out on the Internet,” said Kkat, who neither attends brony conventions nor even owns a cell phone, both for privacy and economic concerns.

However, Kkat was more candid when it came to talking about the story. Fallout: Equestria was the author’s first piece of FiM fanfiction since becoming a brony.

“Before Fallout: Equestria, I had written a few short stories, both fanfiction and otherwise,” the author told us. “However, Fallout: Equestria is my first story since college that I have written to its intended completion.”

Since it was Kkat’s first effort, the author never expected the community around it to get so big.

“Fallout: Equestria has had a far greater number of readers than I ever imagined it would,” Kkat said. “The story has inspired thousands of artworks, musical compositions, fanfics and more. It is even being translated into seven additional languages.”

Kkat never intends to make a profit off of Fallout: Equestria and is not involved with the hardcover edition.

“To this date, I have not seen the books except in photographs,” Kkat said.

Instead, Kkat prefers to give away the story. Anyone can do whatever they want with Kkat’s original characters, much to the author’s delight.

“A few months ago, a fan of Fallout: Equestria crafted a set of sculpted figurines inspired by the story. He then auctioned them off, sending the money to the Japanese Earthquake and Tsunami Relief Fund. Things like that make this community something much more beautiful than any group I have been part of before. I gratefully consider myself a brony.”

Bronies are equally grateful for Kkat. More than 5,000 fans have commented on the fanfic with their own stories. Even a year after the fanfic was completed, the Fallout: Equestria Tumblr tag is updated several times a day.

Kkat may be mysterious, but in Equestria—the magical realm of My Little Pony—the author’s work is ubiquitous.