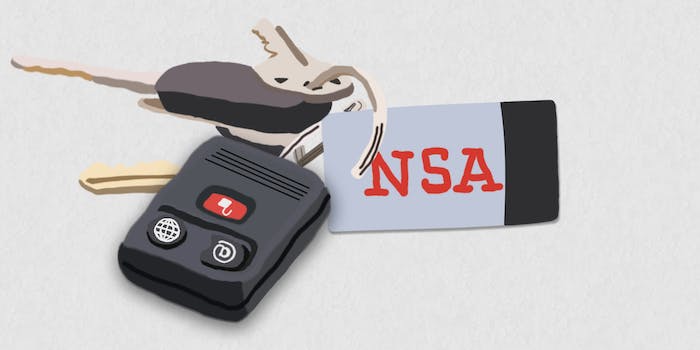 Forget PRISM: FAIRVIEW is the NSA’s project to “own the Internet”

According to an NSA whistleblower, the agency's Internet surveillance operations—including PRISM—fall under one umbrella, known as FAIRVIEW.

According to Thomas Drake, a former National Security Agency senior executive who blew the whistle on the agency’s reckless spending and spying in 2006, a previously unknown NSA surveillance program known as FAIRVIEW aims to “own the Internet.”

Last month, former NSA contractor Edward Snowden leaked a series of PowerPoint slides to the Washington Post and the Guardian revealing that the agency was engaged in a large-scale Internet surveillance program, dubbed PRISM, that collects Americans’ chats, emails, photos, and videos. One of the slides, only later released by the two papers, made reference to a group of additional “upstream” collection programs, including two named FAIRVIEW and BLARNEY, but gave no further details about their function.

Drake, who was prosecuted under the Espionage Act for his whistleblowing, explained the upstream programs to the Daily Dot.

“Upstream means you get inside the system before it’s in the Internet. In its pure form,” he said.

About the slide, Drake said, “you’ve got programs and umbrella programs.” FAIRVIEW is one such umbrella. Drake referred to it as a “highly classified program” for tapping into the world’s intercontinental fiber optic cables.

“It’s just a name,” Drake said, “that at the highest level means to own the Internet.”

According to Drake, an article published this week in the Washington Post reveals one such instance of FAIRVIEW. The story describes a contract signed between the Asian telecom giant Global Crossing and the U.S. government. “The agreements,” the Post reported, “do not authorize surveillance. But they ensure that when U.S. government agencies seek access to the massive amounts of data flowing through their networks, the companies have systems in place to provide it securely.”

Domestically, similar efforts to tap into the Internet were leaked by a former AT&T Computer Network Associate Mark Klein, who witnessed the agency attaching splitters to the company’s San Francisco office. “What I know of the splitters,” Klein said, “is that they get everything.” 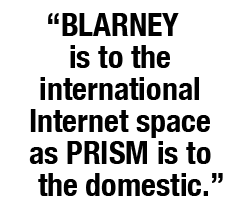 According to Drake, beneath the umbrella of FAIRVIEW, programs like BLARNEY collect and analyze the data that is made accessible by secret arrangements like the one with Global Crossing. “BLARNEY is a key access program facilitated by these commercial arrangements that exploits the Internet data at these junctions,” Drake said. “BLARNEY is to the international Internet space as PRISM is to the domestic.”

Drake pointed out that FAIRVIEW is also the method through which the NSA receives the information it has collected, essentially co-opting the fiber optic cables to transmit the data back to the agency to be analyzed by data mining programs.

At this point, said Drake, “I don’t try to put too much emphasis on the names of the projects.” Their distinction, he said, is largely holdover from a time when the NSA’s reach was less broad. They were named to delineate one particular data gathering technique from another. Many carry different names simply because they are specific to a particular region or state. “The NSA has open season on anything foreign,” he said.

In Drake’s opinion, journalists have overlooked the significance of BOUNDLESS INFORMANT, which tracks the international intelligence gathering techniques of the NSA.

The Guardian reported that it “has acquired top-secret documents about [BOUNDLESS INFORMANT] that details and even maps by country the voluminous amount of information it collects from computer and telephone networks.” According to Drake, the program indicates the incredible success of FAIRVIEW.

Of FAIRVIEW, Drake added, “I suspect a lot more is going to come out.”