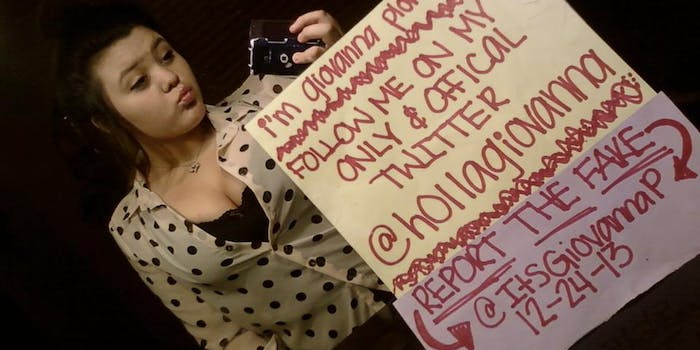 A teen girl who became famous for eating a tampon in a grossout video has Facebook-married a boy who made a video where he eats feces.

Meet Giovanna Plowman. The 15-year-old Buffalo, N.Y. teenager recently became famous on the Internet for posting a YouTube video of her eating her own bloodied tampon.

The video was originally posted on Facebook on Saturday and subsequently uploaded to YouTube that same day. Both clips were eventually taken down because they violated the site’s Terms of Service, but video of Plowman’s exploits can easily be found elsewhere, like here, for example.

According to Know Your Meme, the Encyclopedia Britannica of the Internet, the incident has earned her the very fitting nickname “Tampon Girl.” It also brought her a lot of negative attention, enough for Plowman to respond to her haters via Facebook, in a message suggesting her quest for Internet fame is no worse than reality TV:

“Have you ever watched jackass? Fear factor? Jersey shore? I know you all have. Its okay for them to get famous from eating and doing such stupid stuff or being sluts and partying hard. But i eat a tampon and get so much hate? It makes no sense. Just because im a girl and ate something gross and got famous you hate on me? Im a real nice girl. Dont start drama and i have only ever had one boyfriend? Please tell me how im a slut. Smh idgaf about you haters ill shine on with or with out you!”

Among the initial haters was Dino Bruscia, another teen who became famous for a gross out video of his own. Only instead of eating a used feminine hygiene product, Bruscia ingested his own feces (along with some ice cream).

Upset that Plowman had upstaged him, the temperamental Bruscia took to Twitter to vent:

“Still trying to overcome the fact a bitch who sends all her nude parts eats a tampon with blood out famed me in 1 day. #fuckisthat #bringit.”

But hate soon turned to Internet love, which (as Manti Te’o knows) is as legitimate as the real thing. On the same day that Bruscia denounced Plowman, the two got married on Facebook.

Some have accused Bruscia of doing it for the fame. It’s a fair accusation to make, especially when you consider that Bruscia only has 17,860 followers on Facebook, while Plowman has 209,000 subscribers. Further evidence also lies in a Facebook update written by Plowman, asking fans to follow Bruscia on Twitter.

But if two attention-starved teenagers can’t fake-marry each other on Facebook for the sake of more publicity, then why have the institution of marriage on the social network at all? After all, they’re not desecrating the real thing. We’re pretty sure Kris Humphries and Kim Kardashian already did that.

The Daily Dot reached out to the Facebook-married couple, but we have not heard back from either one.