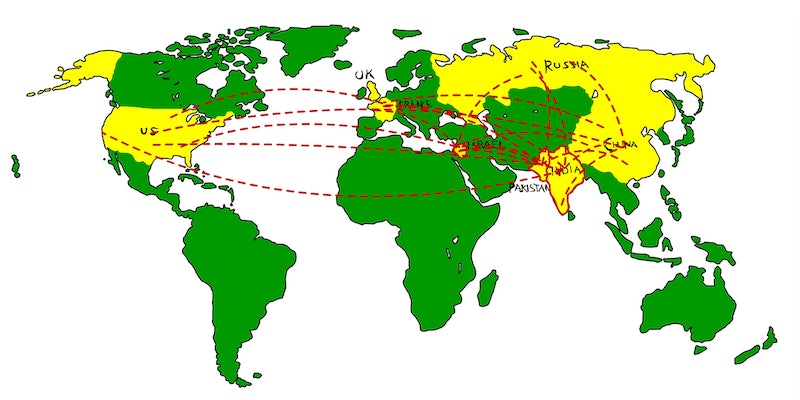 It is pretty easy to predict the end of the world. Nostradamus did it a dozen or so times a week during his career as prognosticator, and not a day goes by that there isn’t a person on the subway holding a sign and shouting, “The end is nigh.”

But all those apocalyptic warnings have never had quite the same resonance as one video, which you may recall being the first thing you ever shared on the internet.

“Hokay,” Jason Windsor begins, before launching into a two-minute story about how the biggest fear for citizens of the world shouldn’t be meteor strikes or global warming, but rather the massive stockpiles of nuclear weapons the biggest nations possess, all on a hair trigger.

You’ve seen it. Everyone’s seen it, but here it is again.

The video hit the Web right after the U.S. invaded Iraq in a quest to find Saddam Hussein’s weapons of mass destruction, which Windsor said really brought to light to him, at 18 years old, all the danger in the world.

“I don’t know that I really thought that the world was going to end,” Windsor said, “but it was definitely scary. That was around the time of ‘where are the WMDs? We need to find the WMDs.’ There didn’t end up being any, but it did bring up the knowledge that there are major powers that have nukes at the ready. I guess that was kind of the first time I sort of had to comprehend that.”

One of the interesting things about the video, despite being inspired by the invasion of Iraq, it—almost nonsensically—begins the whole nuclear holocaust scenario with the U.S. striking China first.

At the onset of the Bush administration, the U.S. did have a minor diplomatic kerfuffle with the Chinese, when an American spy plane was forced down and its crew held for 10 days. But other than that, relations with China were somewhat stable.

But now, our incoming president has taken a very, very different tack toward the Asian superpower. Does Windsor see his prediction, made so long ago, as prescient today?

“I don’t know that it’s more plausible now,” he said. “I don’t know if that scenario would play out like that, but certainly I think that our incoming president, with what I would call his unmindful speech and way he can flippantly and very publicly put out violent and hateful content into the world … has an impact. Speech is powerful. Violent acts and destructive acts can be caused just by what [he] tweets.”

Trump, of course, riled up Beijing with a series of tweets about manipulating China’s currency and with his phone call to Taiwan. If Windsor, who so publicly feared for the destruction nukes would bring about, had a chance to speak with Donald Trump, what would he say?

“I think he needs to look really deeply at himself and decide whether or not the ideas that he believes … are beneficial or are harmful. Not only for himself, but for his country and for the people who believe in him and for the who believe that he’s wrong … because I don’t believe they are coming from a place of peace and understanding.”

And to prevent a nuclear war among the world, perhaps, Windsor speculates, it’s not just Trump who need to re-evaluate himself, but all of us.

“It’s easy for a liberal person like me to fall into the trap of thinking that [others] with long-held stances are the ones that need to come around and realize they are wrong, but it’s true of both sides.”

“I think both sides can’t talk to each other, are making each other angry, and [I hope we] realize that we need to understand and communicate [with each other to] make it through the next four years.”

Without the world ending, that is.