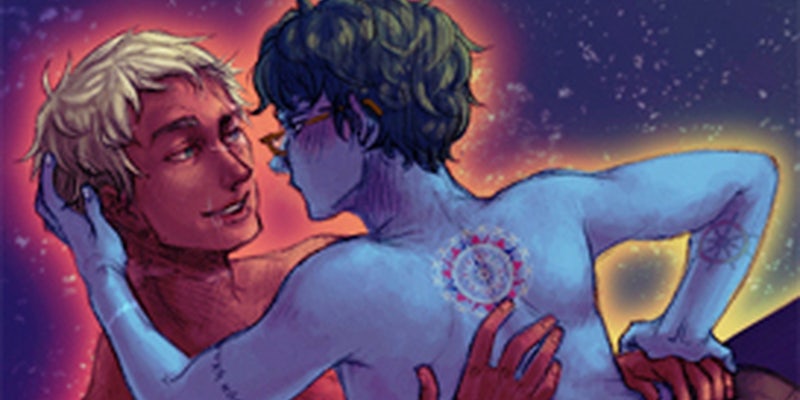 Earth and Jupiter are in a relationship on Tumblr

Fans on Tumblr have turned the planets into people and written an entire fanfiction romantic relationship for the two.

Last week, the planet Jupiter appeared to sustain a major impact from a comet or asteroid, “saving” Earth from a potential collision with the object in the process.

In response, fans on Tumblr did what they do best, and turned Jupiter/Earth into an OTP—a One True Pairing—and the Milky Way into a fandom.

Oh, sorry, we meant Jupitearth. That’s the combined name for the pairing of Jupiter and Earth, who are imagined in this scenario to be people. So far, the new fandom is ignoring any long-distance elements to their relationship.

It started when Tumblr user bloggish chimed in on a thread where people were already shipping the two planets—imagining them together in a romantic relationship (known in fandom as a “ship”) where Jupiter was the injured hero. Bloggish’s story depicted Jupiter as an older, muscled behemoth of a man and Earth as his waifish, starry-eyed protégé:

Earth gulps. “You shouldn’t have to do this for us,” he says.

Jupiter smiles, before pulling Earth into his embrace. Um. Okay. “It’s alright, Earth. I don’t mind. After all – I’m a gas giant, emphasis on the giant. I can get by, pretty much no matter what happens. Other people are more important. People like you. You’re… special.”

Jupiter chuckles again. “You’re better than you think you are. You’re alive, Earth, and that’s the most important thing. You have people, ideas, emotions still to share. You have so much to find, so much to see, so much to explore. You’re fragile, and I wouldn’t let you get set back by just any old meteor. You are special, Earth; you’re gonna fly across the universe one day, and to me that is worth a thousand burns.”

The thread racked up 40,000 notes and fanart as the, erm, space ship took off. The story, as the original source material for the ship, became the fandom’s impromptu canon. The final line, “worth a thousand burns,” became the new fandom’s catchphrase, and even spawned fanfiction of its own.

Most of the new fanwork populating the “milky way fandom” and “jupitearth” tags features the original male/male slash pairing of Jupiter/Earth, but some feature Earth as female. Still others branched out and shipped other planets and microplanets, while others skipped straight to Mars/Earth/Jupiter threesomes.

Within the past three days, the fandom has ballooned beyond fanfic and fanart to boast an assortment of the following:

“Only Tumblr could get me to ship planets,” said orchidvenom when posting Jupiter/Earth fanart.

Naturally, like any promising fandom, this one already has controversy over whether Earth should be male or female, with a bonus complaint about Venus being anthropomorphized as male. And, as fans of anime classic Sailor Moon pointed out, anthropomorphizing planets and then hooking them up has been done before.

Jupitearth may not be the first planetary ship to make an appearance in the annals of fandom. But it’s definitely the first one to light up Tumblr like a cosmic explosion.

Image by ekaitz via Tumblr