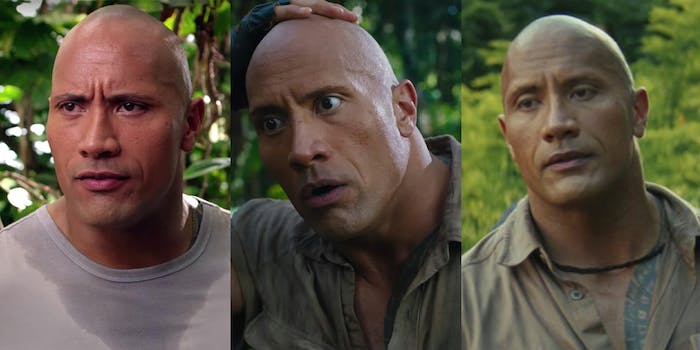 Here’s proof Dwayne Johnson looks the same in every movie

In a jungle somewhere...

Dwayne Johnson, aka “the Rock,” has starred in a lot of movies. For reference, his IMDb page lists 100 acting credits. A lot of these movies are action blockbusters that are similar in plot and setting. So similar, in fact, that it’s hard to differentiate between them. Check out these screengrabs that a Twitter user posted this week:

These are three separate movies pic.twitter.com/ZsqmhJx5vj

Yes, that’s right. These three scenes are from different films featuring the Rock. And that’s the joke: All three scenes look like they are from the same film. Each photo features a jungle-like setting, the Rock in a muscle-showing grey or taupe shirt, and a confrontation between the Rock and an off-screen character.

The tweet racked up more than 117,000 likes and prompted humorous discussions in the comment thread about the Rock’s branded film genre.

Welcome to the jungle, we've got The Rock.

The Pitchman: So in THIS scene you're in the jungle and…

In case you were wondering what the three films are, here are the answers, from left to right: Journey 2: The Mysterious Island, Jumanji: Welcome to the Jungle, and the upcoming Rampage. And, yes, we had to look it up.