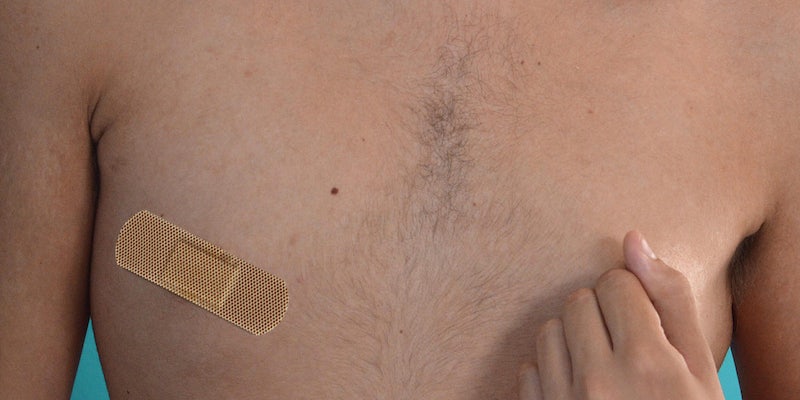 A kid allegedly froze his nipple off and flicked it across the room.

For years, there’s been a rumor among teens that if you freeze your nipples with AXE Body Spray and then give them a hard flick, they’ll come right off. You might not imagine anyone would be dumb enough to confirm this through experimentation, but one person on Tumblr claims to have seen it happen, up close and personal. Their tale of nipple-related woe is going viral, and some are even calling it “THE WORST FUCKIFJ PSOT ON TUMNLR EVEBR.”

This all started when Tumblr user photoshop-and-chocolate wrote, “today I learned nipples grow back and now have to figure out what to do with this information.”  (Fact check: human nipples can recover from surface damage, but they don’t actually grow back if they’re completely removed. That’s why cancer patients sometimes have plastic surgeons reconstruct the nipple after a mastectomy, for example.)

That’s when another Tumblr poster, dualclock, chimed in with a nipple story that’s certain to scar you for life. Probably not as badly as it scarred the poor kid who lost his nipple, though. A summary doesn’t really do justice to this strange case, so we’ll present it here in its entirety:

i know nipples grow back because once when i was in middle school in my art class a bunch of dudes at my table who were always fucking around instead of doing their work heard a rumor that if you spray AXE directly onto your nipple for exactly sixty seconds, and flicked it, your nipple will come off. So the moment the teacher left the room to go to the bathroom or something, they whip out a can and one brave soul among their number begins to spray himself, while the others chanted ritualistically. At 60 seconds, they watched, giggling, as the young man put his hand up to his breast and flicked. to their horror, the nipple did come off and, at ballistic speeds, soared across the table and hit me right in the cheek. And stuck. So everyone who was aware of this spectacle is sitting there in stunned silence, all while blood gushed from the nipple hole of the young man. I am so stunned that I am literally incapable of moving, having astral-projected so far away from this disembodied nipple that i may as well have been a dead man. The teacher returns and his shirt comes down, in an attempt to hide the tomfoolery, but yall know AXE Body Spray knows nothing of mercy, and almost immediately she was alerted to the scent of defeat and the sight of blood seeping through the young mans shirt. She didnt ask for an explaination, simply advised him to take the pass and go to the nurse. As he stands to go, his fellow comerade, remembering me suddenly, reaches over and plucks the bodiless nipple from my cheek, like a grape from the vine, and runs up to his friend with the words “dont forget your nipple”. It was a moving experience that honestly changed my life forever. I’m a new man after that day.

Don’t. forget. your. nipple. A thousand scream emojis aren’t enough. Dualclock’s trauma, which is now the shared trauma of everyone on Tumblr, has nearly 20,000 notes (a.k.a. likes and reblogs) and counting.

But wait … this raises more questions than it answers. If you take the gruesome story at face value, then the rumor about freezing and flicking a nipple off is true. However, it doesn’t actually seem to work:

Commenters on this video have criticized the poster for not spraying the AXE long enough or close enough to his nipple, but this attempt didn’t work, either:

In 2o14, the tabloid Daily Mail alleged that kids were giving themselves nasty cryogenic burns with spray deodorant as part of something called the “aerosol challenge.”

So, it seems possible you could turn your nipple into a raw, red circle with AXE. However, that’s a far cry from flicking the nipple itself and having it land on someone’s face.

All in all, we’re skeptical that someone forgot his nipple, but it’s such a strange and nauseating story that we really want to believe it. But also, the story doesn’t even say anything about it growing back. So how does this dude know?