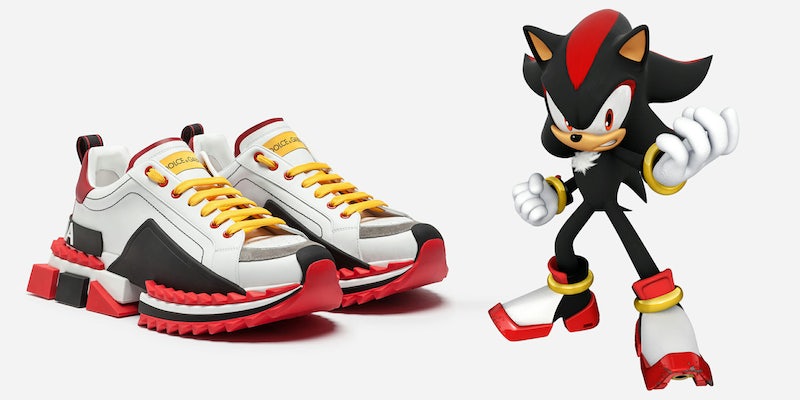 These Dolce & Gabbana kicks are stealing Shadow the Hedgehog’s style

Who knew Shadow the Hedgehog was such a style icon? Apparently world-class designer Dolce & Gabbana did, because the brand released a pair of sneakers that look exactly like Sonic the Hedgehog series character’s more brooding nemesis and occasional ally, Shadow.

Catch me in these jawns pic.twitter.com/oB9Fm7bb5O

“Doctor Voodoo” on Twitter, or @itskrisbruh, made the comparison, lining up the red, white, black, and gold pair of sneakers with an image of Shadow himself, and the resemblance is uncanny. Of course, the shoes, called “Super King,” have long since been sold out online from the designer’s web store, but who’d want to pay over $600 for them, anyway?

Shadow the Hedgehog fans, that’s who.

You might want to set some alerts and keep an eye out for Dolce & Gabbana to restock these bad boys, now that the original tweet has gone viral. But if you do wanna cop a pair, they have to be the real thing. No knock-offs allowed.

Only a loser would wear those knock offs instead of these bad boys. pic.twitter.com/RgkbYKHeUZ

Of course, it looks like these aren’t the only designer shoes to have taken more than a little inspiration from video games and anime characters. You can’t look at these sneaker heels and say Gundam had nothing to do with them with a straight face, right?

reminds me of deez pic.twitter.com/VmgX4LiKEy

We certainly can’t forget the official Sonic-branded shoes from Puma, either. Those were pretty fresh, even if they’re more inspired directly by Sonic the Hedgehog as a game rather than any of its characters.

Are the shoes as close to Shadow’s sneakers as everyone seems to believe? Was Dolce & Gabbana inspired by the video game character? It really makes you wonder. And we’re not sure, of course, but there’s one thing we are sure about.

Painful. Let’s wait for a cheaper version to pop up from Skechers or something like that. With Shadow being a trendsetter and all, it’s bound to happen, right?