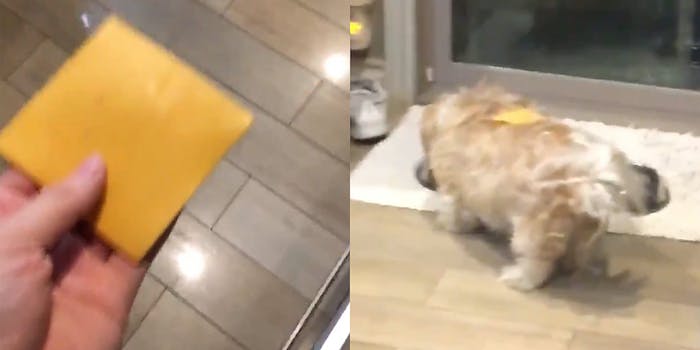 ‘Dog cheese’ is the internet’s latest viral challenge, and Twitter loves it

Cheese goes well on everything: nachos, pasta, cheeseburgers, chili cheese dogs, the list goes on. But what about throwing cheese at your dog? One Twitter user sparked a viral sensation on Saturday after he invented “dog cheese,” a game where you lob a slice of American cheese at a pupper and see how they react.

YouTuber Matthew Elias first came up with the idea after spending a lifetime throwing cheese at things. After he ran out of objects, he “thought I’d see if my dog could catch it,” he told BuzzFeed News. The end result is, of course, dog cheese.

I'm bad at this game but it's ok cos she is too pic.twitter.com/DF1DIOblTE

Let us know if our good boy and girl are on tv!! pic.twitter.com/rz2eXhvWsM

Some dogs could catch the cheese with their mouths.

I tried playing dog cheese but he ate it pic.twitter.com/Hkh0d4rz2t

Don’t have a dog? No worries. Try a lizard or a cat.

I felt mean but then I remembered she likes to fling herself off the bed so she’s definitely unbothered pic.twitter.com/VodTcLDFlA

I see your dog cheese and raise you cat tortilla pic.twitter.com/rVAgvPWDTV

A human works too.

As for Elias’ newfound dog-cheese fame? He figured he’d become a viral sensation sooner or later, but not quite like this.

“Always knew I’d get my 30 seconds of fame some point in my life,” he tweeted. “Didn’t expect it to be for throwing cheese at a bewildered animal tho.”

Always knew I’d get my 30 seconds of fame some point in my life. Didn’t expect it to be for throwing cheese at a bewildered animal tho.