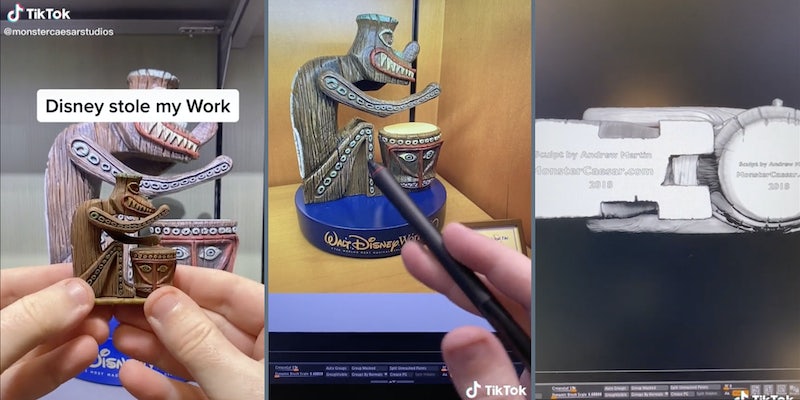 ‘I really hope they compensate you’: Sculptor claims Disney stole his figurine design in viral TikTok

'Disney is in the wrong.'

In a viral TikTok, a sculptor alleges Disney “stole his artwork” and is selling copies of his design in its parks.

TikToker and sculptor Andrew Martin (@monstercaesarstudios) posted a video Saturday comparing his work to merchandise found at Disney World. His video has since reached over 635,000 views.

In the video, Martin explains that he created a fanart sculpture of one of the characters from the Enchanted Tiki Room, an attraction at the Disney parks. He published his model of the sculpture on Thingiverse—a file-sharing site—so others could 3D print and build it themselves.

That was in 2018. Now, Disney World is apparently selling a figurine of that same Tiki Room character, and Martin says its design looks eerily similar to his. Martin points out some notable details—small cuts, dents, and conjoined circles—that are identical between his model and Disney’s statues.

“It did look a lot like mine, because it is mine,” Martin says in the video. “Disney is taking credit for my work and selling it in their parks without my permission, consent, or even giving artist credit.”

Many commenters were supportive of Martin and called for Disney to pay him for his work.

“This is insane, I really hope they compensate you for your work!” one user commented.

“You can sue for the credit and compensation,” another user wrote. “Disney is in the wrong.”

Others pointed out that Disney has a history of stealing artists’ work.

“They allegedly do this to Star Wars fan models all the time,” one user commented. (YouTuber Eckharts Ladder has made several viral videos documenting these accusations.)

Some users commented that Disney had a right to use Martin’s design because Martin “copied” them first.

But as Martin shows in the video, he published his design under a Creative Commons license The license allows him to make and share designs based on Disney’s original characters, as long as he—and anyone who uses his designs—doesn’t sell them and gives credit to Disney.

Martin also explains that his work was probably stolen by a freelance artist contracted to design the figurine.

“So the most likely thing is the thief was some lazy waste of skin, talentless hack, that got himself or herself an easy payday by stealing my work and passing it off as their own,” Martin says.