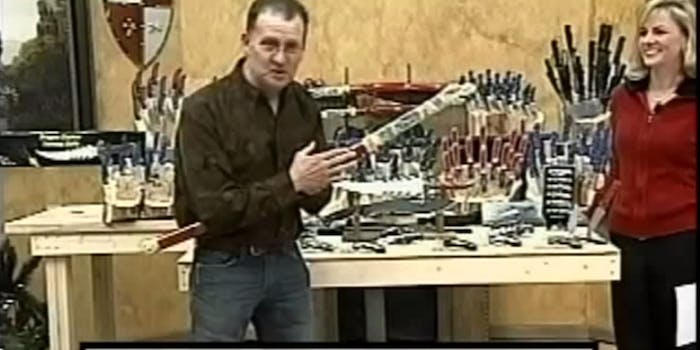 The most fascinating train-wreck in the history of bad ideas.

Cutlery Corner is my favorite television show of all time. It is funnier than The Office, more socially relevant than The Wire, more suspenseful than Breaking Bad, and profoundly less boring than Mad Men. Every night the men and women on Cutlery Corner create the greatest accidental art known to mankind. Let me prove it to you.

Cutlery Corner is a live, nationally televised shopping network based in Chattanooga, Tennessee. By “nationally televised” I mean that it’s broadcast on public access at like 4am ET seemingly every day. The hosts sell knives and swords, so longtime viewers of the program affectionately use the nickname “knife show.”

That seems fairly normal, right? Why is a show about knives that exciting? Well, the short answer is that these people are joyfully unhinged.

The long answer is that Cutlery Corner is the most fascinating train-wreck in the history of bad ideas. The hosts are so gloriously deranged, and they spend every show shouting the least-reasonable things you can imagine about knives. Cutlery Corner is an exercise in waiting for the other shoe to drop. It never does, and they manage to replicate it day, after day, after day.

Here’s host Tom O’Dell absent-mindedly turning a katana sheath around, and almost slicing his hand off.

Here’s O’Dell showing off the “Big Kahuna Sword,” and accidentally knocking over a display of other swords. At which point he says “It’s big, I know that.”

Here’s another host who temporarily loses his fucking mind, and decides to bang the blunt edge of a sword on the table in front of him. The sword breaks in half, flips back, and stabs him in the guts.

Here’s a fan compilation of quotes, featuring all-timers like “98 cents a knife!” and “This is the stuff that others only imagine being able to order.”

The funny thing about Cutlery Corner is that the deals are actually kind of incredible. You can drop $100 bucks and get shipped an irresponsible number of knives. I watch it for the humor, but I’ve definitely come close to making an order multiple times.

Cutlery Corner is, again, usually aired during the witching hours of paid programming. This is hilarious, because it means the producers are scratching out a living purely off of drunk dials and legit late-night libertarian paranoia. However we have a loving God, and that means that the knife show lives and breathes in earnest on YouTube.

That’s right. Four-hour broadcasts of this goofiness are now resting at your fingertips.

You have no idea how happy this makes me. I feel like we’ve finally cracked the code. While you were blogging True Detective recaps I was watching a man try to sell me a Dale Earnhardt sword. I was blind, but now I see. Watch Cutlery Corner, and join me in nirvana.