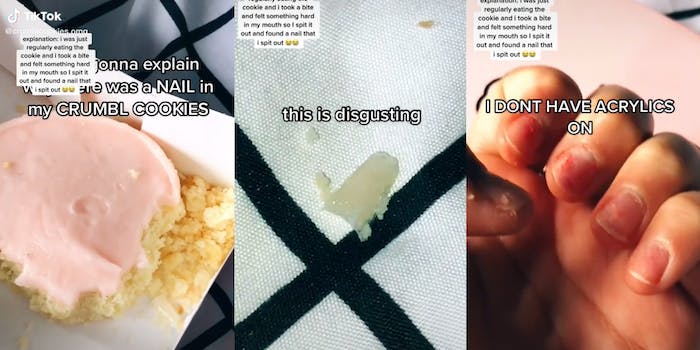 ‘This is disgusting’: TikToker says they found fake fingernail in their Crumbl cookie

'I was just regularly eating the cookie and I took a bite and felt something hard in my mouth.'

In fact, it appears they’ve created the account specifically to share that they found a fingernail in their cookie—the only videos shared by the account are of the incident or in response to comments. The first video featuring the nail has gained 360,000 views since it was posted to @crumblcookies.omg on July 28.

“Explanation: I was just regularly eating the cookie and I took a bite and felt something hard in my mouth so I spit it out and found a nail that I spit out,” the poster wrote.

Crumbl Cookies responded to the video, asking which location this occurred in and apologizing for the incident, on its own TikTok account.

Some commenters pointed out that the circumstances made it look like the TikToker gave false information about where the nail came from.

“To be fair, it does look like you had acrylics,” @leeanngreen wrote.

The poster shows their nails in the video, writing in the comments that they had pink nails but removed them. They said that if the nail had been theirs, it would have been pink. The nail shown in the video is covered in cookie residue, but it does not appear to be pink.

Another commenter alleged they’ve seen other questionable things from Crumbl Cookies on the platform. “CRUMBL IS FALLING APART,” @emma__.sophie wrote. “I’ve seen moldy cookies, egg shells, no toppings on the cookies and now this.”

The Daily Dot has reached out to Crumbl Cookies and the creator of the video.