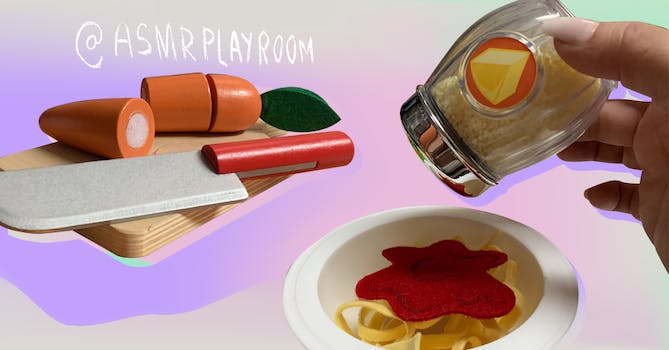 ASMR Playroom is bringing ‘joy to your inner child’

'It brings you back to that quiet place—childhood.'

ASMR Playroom is the ultimate comfort TikTok page. The 27-year-old creator behind the account, Catherine (who declined to use her last name for this story), uses the toys in her children’s playroom to make some of the most relaxing videos on TikTok. She combines the nostalgia of toy foods with the calming qualities of ASMR to bring “joy to your inner child.”

“The nostalgic comfort on top of the comfort and relaxation that ASMR brings, I think it really does make a really nice, just happy combination,” she tells the Daily Dot. “It’s a really peaceful experience. It brings you back to that quiet place—childhood.”

Catherine’s videos will indeed transport you to simpler times. In some of her older videos, for instance, Catherine used a 10-year-old green Little Tikes kitchen that she said brought up a lot of memories for her viewers. The bubbling sounds it makes and the various buttons brought folks back to their younger selves.

Catherine pivoted to ASMR content in January. By then, she had amassed around 150,000 followers after previously doing DIY content for about a year. Some of her DIY projects involved building some of the pieces in her playroom, which she originally made as a space to keep her children entertained during quarantine. The DIY content wasn’t fulfilling, however, so she sought to do something “more fun” with her videos.

Catherine uses a lot of Melissa & Doug (and similar) sets, slime, and some DIY crafts to execute “orders”—comments from viewers asking for different dishes—showing her audience each satisfying step of the process. Many of the “sliceable” toy foods are bound by velcro, so cutting through them with a play knife offers a delightful crunch. For the “liquid” items, she often uses colored slime, which can then be folded into a soothing blob. Catherine says her relationship with her audience is very collaborative, and they suggest a lot of interesting ideas to try in new videos.

“They are always giving such good ideas of like different ingredients to use, or slimes to try, or clays,” she says. “I love it when somebody asks for a dish that I haven’t made before, because it forces me to be creative and use the toys that I have in a different way. Like… a lot of people have been asking for lasagna. So I’m trying to think of what can I use for sauce or noodles. It’s just really fun to think like that.”

Catherine is a stay-at-home mom by day and a content machine by night. She says she only makes videos after her kids go to bed, which is around 8:30pm. When her account started picking up from the ASMR content, Catherine was putting in an ungodly amount of time into her videos and posting six times a day. She admits it wasn’t sustainable, but she was afraid that the algorithm would punish her for posting less. She was making a good amount of money posting multiple times a day and didn’t want to lose that.

“I was worried about scaling back,” she says. “Like what if the algorithm hated me if I stopped posting every single day and only posted every other day? I didn’t know what would happen.”

She has since scaled back, posting once or twice a day, she still has high engagement. It’s still a wild production schedule: She starts around 9pm and is “in bed by [3am].” She says she can make about four videos in that window. Catherine clarifies she doesn’t stay up like this every day (“I have a rule I don’t stay up late two nights in a row because otherwise I’m just a garbage human,” she jokes). This schedule works for her, she says, since she does enjoy and take pride in her videos. But she still takes breaks when she needs them and understands she doesn’t owe anyone anything.

“I’m a parent first,” she says. “TikTok is my hobby and I try to be very very clear about that. So if I just disappeared, it’s probably because I chose to sleep three nights in a row instead of making content.”

The beauty is in the basics with Catherine’s videos. None of the toys are particularly flashy, but she has a playroom that any child—current or former—would envy. Who among us doesn’t miss the imaginative nature of playing kitchen? Viewers wish they could play with the toys too, if only for a moment.

And Catherine hopes to make that a reality for people in the future. When asked about her goals, she says that she wants to make a public playroom for people, young and old, to reserve a private time to play with all of the toys she’s amassed. She has four play kitchens in her basement, ready to be moved into that space, whenever it’s ready.

For now, viewers just have to enjoy from a distance, and luckily, there’s no shortage of enjoyment with ASMR Playroom.