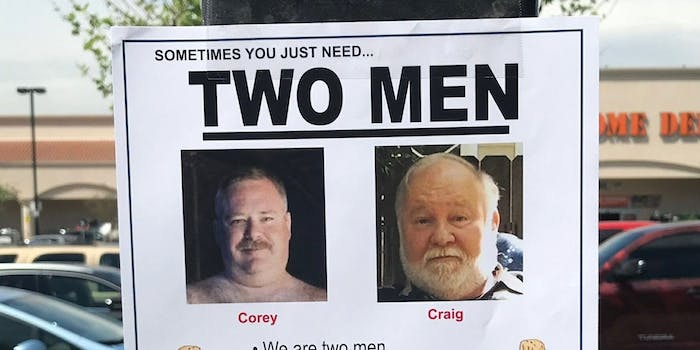 Meet Corey and Craig, the 2 burly men who the internet loves so much

Meet Corey and Craig. They’re two men who also happen to be burly. They’re apparently great friends, and if you need some help—physically or emotionally—they’re happy to help. They, in fact, will do what you want. And the bonds of their friendship apparently can perform any chore that needs to be done.

Naturally, the internet fell in love.

And how could you not? How often are two burly men so sentimental in their friendship, writing phrases like “We always come to terms with our differences because friendship like this comes once in a lifetime” and “By hiring us, you will receive not just the strength of our bodies but the strength of our emotional bond as well.”

If ever there was a business started after an afternoon sitting in the garden drinking beer, this was it.

I would 100% hire these guys to carry me round on their shoulders and tell me tales of their great chumship pic.twitter.com/tT4o7WWO9E

But Corey and Craig aren’t the only burly men who can be hired.

I WANTED TO PLAY TOO pic.twitter.com/m1JYqMcX2o

A lot was made on the internet about why Corey was shirtless in his photo, and plenty of people are claiming the meme is fake anyway (some also have claimed that they’ve called that phone number and that Corey and Craig seem to be in the middle of some kind of personal drama).

The 406 area code on the flyer leads us to believe these men might be based in Montana. But in reality, the touching bond forged by Craig and Corey is universal. Hopefully somebody will hire them for physical labor but then will be overwhelmed by their love. After all, Craig and Corey are burly men, and they’ll make you see all the beauty this world has to offer.