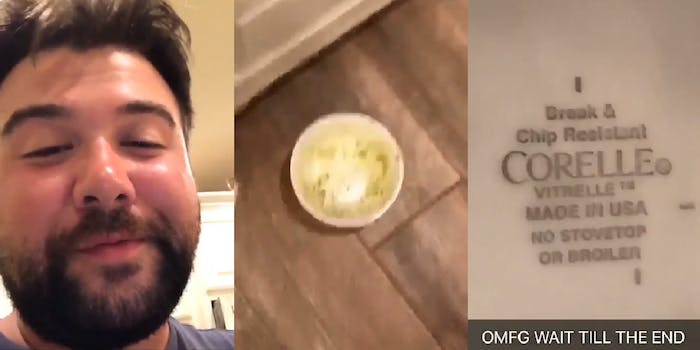 They aren't as 'unbreakable' as he thought.

“Do y’all remember those Corelle like ‘unbreakable’ dish commercials?” an Arkansan man named Zak Martone asks at the beginning of a video that has now gone viral. For those of you who don’t know what he’s talking about, here’s a couple of old unbreakable Corelle commercials showcasing the durability of their dishes.

With a little searching, you can find a ton of YouTube videos where people test out Corelle dishes, some of them right in the store.

Corelle is careful to never actually refer to the dishes as “unbreakable” (they leave that up the people who make combs). As Martone points out in his video, the dishes only say “Break and chip resistant” on the bottom, but if the commercials are any indication, these things should be able to take quite a bit of punishment. In fact, the entire reason for the Twitter video is that he had just dropped his bowl and watched it bounce once and land safely without so much as a crack.

He then decided he should share his findings with the world and spread the amazing news about Corelle. As you probably guessed, things did not go as planned. Watch below:

I thought I had unbreakable dishes pic.twitter.com/2Bcmubw9Nu

After Martone washes out the bowl and purposely drops it on the ground to test its strength, the bowl completely shatters.

“When I dropped the bowl the second time, I was in pure shock it actually broke, even though you can’t tell from the tone of my voice,” Martone told the Daily Dot via email. “I was mostly confused as to why it broke because I’ve dropped these dishes a few times over the years and never have I seen this as a result.”

Martone says he thinks it might have been washing the hot bowl in cold water that caused it to shatter so dramatically. “I believe it actually broke from the drastic temperature change.” he theorized. “It was hot from the food that was in i,  and when I rinsed the bowl out with cold water, it made it more susceptible to break…either that or it fell at just the right angle.”

So what is it about this video that makes it so entertaining? Is it his confidence in the bowl being so quickly shattered both literally and metaphorically? Is it him washing the last remaining food particles out of the bowl so he doesn’t have to “clean up” anything? Maybe it’s just the satisfying way the bowl practically disintegrates when it hits the floor.

Whatever the reason, Twitter is loving it, and the video has now been watched over two million times.

the comedic timing is everything

I could watch this on a loop for hours lol pic.twitter.com/tnKtAnelVC

When i give another toxic person my heart pic.twitter.com/roLEwXBeAy

Clearly, this is a meme waiting to happen.

Martone might have one less bowl in his cabinet, but he says he doesn’t regret the experience. In fact, he encourages other people to give it a try. “If anyone has Corelle dishes at home, I wouldn’t advise anyone to try and break them after watching that video,” he said. Could people smashing their dishes at home become the latest viral challenge? I guess we’re about to find out.