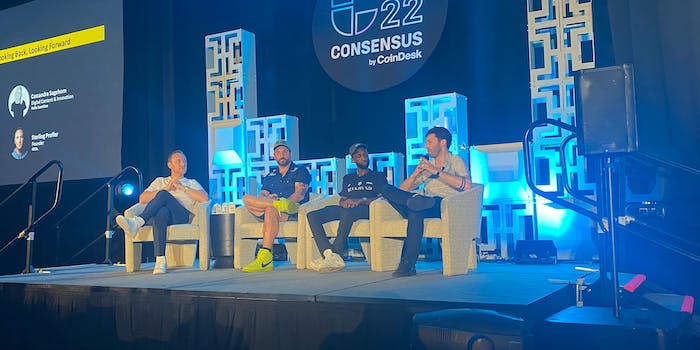 From June 9 to 12, Web3 festival Consensus’s Creator Summit kicked off to explore the intersection of the crypto and creator economies.

Here are our major takeaways from what the internet-obsessed, blockchain-fanatic creators and business leaders had to say at the event—including why the blockchain appeals to some digital artists; advice on what Web3 creators should do while the crypto market is in the gutter; and the tension between the decentralized Web3 ideology and big-money talent and tech interests.

Consensus has been going on since 2015, and while it has previously taken place in New York City, this year it came to downtown Austin, Texas—the festival’s first time IRL since it went virtual in 2019. CEOs, politicians, professors, artists, investors, and more took to the stage to discuss Web3. This year, the festival also made a push toward the creator economy, with a half-day “Creator Summit” for business people and creators to connect over Web3 art, finance, and technology.

Most creators speaking at the summit were digital artists, some long-time crypto fanatics, and others who have just begun to sell their work as NFTs. In general, these artists often said they grew tired of putting their digital work—like photographs, drawings, and other creations—on social media with little reward from platforms beyond likes, follows, and maybe a small cut of ad revenue or a creator fund.

With their art being traceable on a digital ledger (the blockchain), artists said they love the ability to clearly trace their digital art and collect royalties on re-sells. Many artists referred to the “1,000 true fans” model, saying it was more sustainable for them to cultivate a niche, superfan community willing to give them money, rather than try to have mass appeal and make money via advertising.

Despite the crypto market being in the gutter—as investors and traders call it, in a “bear” market—panelists remained hopeful and offered advice for Web3 creators in the midst of a crypto downturn.

“If anything, this bear market kind of takes a lot of the noise and hype away,” photographer and NFT artist Jose Silva said at a panel. “Things are a little quieter and you can really focus on building.”

Business leaders shared a similar optimistic attitude toward the market, with some saying cash-grab “bad actors” will be weeded out during this time when getting rich quickly isn’t an option. Panelists encouraged creators to take the time away from hype of speculation to hone in on what value they’re actually bringing to online communities.

“You know if you can find product-market fit at the bottom of a bear market rather than the top of the market, you’re going to do pretty well,” marketing entrepreneur Amanda Cassatt, one of the key marketing movers behind the popular cryptocurrency Ethereum, said at a panel.

Cassatt, who is a co-founder of the Web3 marketing firm and product studio Serotonin, told Passionfruit that she started working on the firm at the bottom of the last bear market.

“Because there was demand even in those conditions, we knew there was an incredible business to be built,” she said. “Since then, we’ve grown our offering and expanded into recruiting and accounting, including launching a product studio that has spun out software companies starting with Mojito, with Sotheby’s and CAA, the leading NFT marketplace infrastructure. We continue to find opportunities in all market conditions, whether that is hiring talent or testing and expanding our products and capabilities.”

Cutting through the optimism were frequent and welcomed acknowledgements of the uglier side of Web3—a volatile market currently at an extreme low; bad actors and scamming; anonymity posing issues of trust and accountability; and recentralization over a so-called “decentralized” blockchain-based world. This stands in contrast to the oft-overzealous speeches we’ve heard at other blockchain panels, providing a more grounded perspective on the space.

Throughout the festival, there was also a frequently discussed tension between wanting to keep Web3 decentralized—away from gatekeepers, big tech, and wealthy traditional media institutions—while the obvious presence of suits and big money filled each and every room.

Traditional business leaders operating in the Web3 and creator economies got a chance to share their side of the story, including during a talent-management panel with representatives from two of the biggest talent agencies in the world, United Talent Agency (UTA) and Creative Artists Agency (CAA).

Some attendees were skeptical of traditional talent agents getting involved with blockchain artists, viewing them as the very opportunity gatekeepers they hoped Web3 would help cut out. However, these agents believe they can add value to creators’ businesses because they can help manage contracts and day-to-day tasks, as well as protect them from bad deals.

“I think it’s really important for these artists that are up-and-coming and who have really dealt with a lot of success really quickly and really early on in their career to bring someone on to filter out opportunities and be that shield for them so that they can really focus on their creative work,” UTA Web3 agent Caroline Hooven said at the panel.

Some folks brought up the idea of the age of Web 2.5, a mix between big business and decentralized transactions on the blockchain. Many digital creators at the event appeared to still be popular on Web2 social media platforms—with Twitter and Instagram still being a core part of their day-to-days—and some appeared to collaborate with brands and companies to help their careers.

Some panelists also pointed out that Web3 livelihoods aren’t always accessible—even if a person is talented—because luck, resources, connections, and the ability to code or understand computers plays a huge role in a creator’s Web3 success.

Ameer Carter, an activist, archivist, and designer, described a push for “public goods” to improve accessibility within the Web3 world. He mentioned how public parks, recreational centers, pools, and other public spaces allow communities to form and build around them. He thinks people should rally to support similar causes in Web3, through DAO grants and donations.

“We don’t support public goods in the space enough,” Carter told Passionfruit in a Twitter message. “A lot of us like public goods, and want to see them, but when it comes to funding them, that support wanes and dissipates.”

Do you think we missed something important to creators at Consensus? Email [email protected] to share your thoughts.