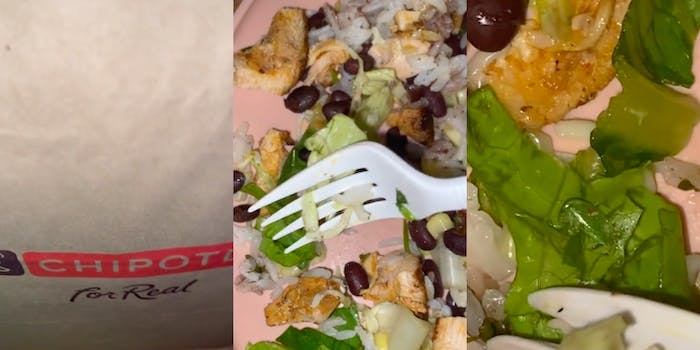 ‘I seen something moving in my food’: Woman shows bug found in her Chipotle order in viral TikTok (updated)

'i used to work for chipotle and it was ALWAYS something in the lettuce.'

A TikToker filmed what appeared to be an insect in her food, garnering disgusted reactions from viewers.

“I was just eating my Chipotle, right?” @butterrgirll on TikTok tells her viewers, “And I seen something moving in my food. So I had to empty it on the plate to make sure I wasn’t tripping.” She continues to film as she spots a bug crawling around her food.

The original video has been viewed over 4 million times in 2 days. In the comments, folks were trying to figure out what was moving around in her food and offering suggestions on what to do.

Another person suggested she contact corporate immediately, “That actually comes from unwashed lettuce! Call corporate now! And don’t let them try and give you free meals!”

“ITS [sic] THE LETTUCE! i used to work for chipotle and it was ALWAYS something in the lettuce,” a viewer said. “Flies, ladybugs. i even seen a stink bug once.

The creator posted an update video saying that she went back to the Chipotle and asked to speak with a manager. There was no manager on duty, but she was apparently able to speak to a supervisor. She told them that she ordered food from the restaurant and that “y’all got bugs in y’all food.” The TikToker said the supervisor offered her a refund, which she said she received.

“I reached out to chipotle and they compensated me with a full refund which was $30 & apologized,” the TikToker told the Daily Dot. “I also reached out to corporate & they told me they will reach out to the store & make sure it wouldn’t happen again.”

The woman who posted the video is the same creator who went viral for eating a stick of butter that she dunked in a jar of Ragu tomato sauce.

The Daily Dot reached out to Chipotle for comment.