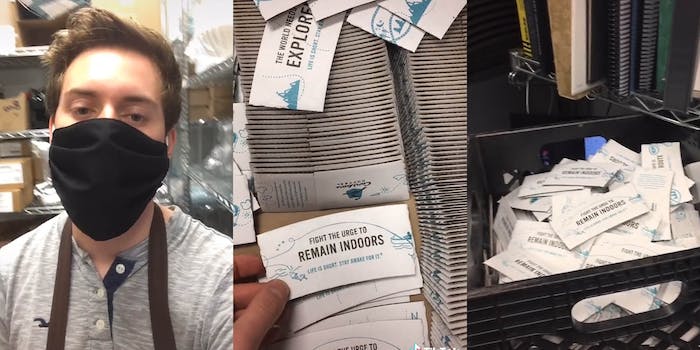 'Fight the urge to remain indoors,' the sleeve says.

A video from an employee at Minnesota-based chain Caribou Coffee has gone viral after showing coffee sleeves with an outdated message.

Michael Reinhardt posted the video to TikTok two days ago, showing a bin full of coffee sleeves with “very on-brand” messaging. However, some sleeves had the phrase “Fight the urge to remain indoors” printed on them, and Reinhardt had to go through and remove them.

The video was highlighted by Washington Post TikTok curator Dave Jorgenson on Tuesday, and now has more than 1.3 million views. But it seems the sleeves have been circulating for a bit. One commenter posted about it on April 25; another posted on April 1.

A spokesperson told the Daily Dot that while on the clock, employees were asked to “sort out materials that were produced before the pandemic and aren’t exactly on point with the heroic efforts that are being made to contain the coronavirus.” Minnesota is still working towards its phased reopening of bars and restaurants.

But Caribou Coffee has remained open, and employees have been pushing for more protective measures over the last month, including personal protective equipment and paid sick leave. Earlier this week, employees staged a second protest, backed by Restaurant Opportunities Center of Minnesota, demanding safer working conditions as well as hazard pay.

According to Bring Me the News, the ROC states employees are asking for better access to masks and cleaning supplies as well as a “robust and comprehensive sick leave policy in all stores.” In a statement to the outlet, Caribou said it’s “made several changes over the past few months to enhance social distancing, promote overall safety, and introduce contactless interaction in every store.” A 10 percent pay increase was also reportedly instituted for the month of May.

Asked about employee safety measures, the spokesperson directed us to a post about curbside and contactless methods of service.