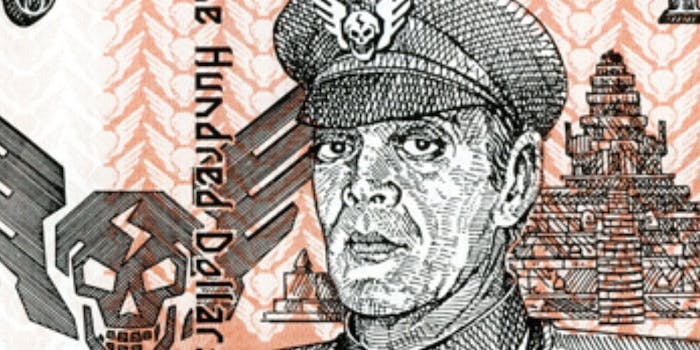 To some people, Bitcoin is as fake as the money from a video game movie.

With the roller-coaster rise and fall and rise (and fall, and rise) of Bitcoin, which was at one time worth as much as $18,000 U.S. dollars, many people have questions. Should I buy a Bitcoin? Should I hold onto it? How do I cryptocurrency? What is the Bit Coins, anyway? One popular answer: Bitcoin is the fictional currency “Bison Dollars” from the 1994 film Street Fighter, based on the popular video game franchise.

To see how Bison Dollars became the newest meme-savvy way to talk about Bitcoin, let’s take a look at the original scene from Street Fighter:

The dictator M. Bison, played by the late, great Raul Julia, has just revealed a suitcase full of money with his own face on it.

“Is this a joke? This money isn’t worth the paper it’s printed on,” says Bison’s lieutenant, Sagat.

“On the contrary,” Bison declares, “Every Bison Dollar will be worth five British Pounds … once I’ve kidnapped their queen!”

Fictional money, driven by madmen, with its value seemingly set arbitrarily? That reminds me of something, but I can’t quite put my finger on i—

Seriously, that's delightful. "Here's my Bitcoin number thingie which I accept donations at." Sorry Uncle, I just have Bison Dollars.

I liked #bitcoin better when they were called Bison Dollars pic.twitter.com/g4IvFJOaas

Bitcoin is still a lot like Bison dollars to me. I can see what you're doing but it just doesn't quite make sense. https://t.co/TC4OoCPncO

The metaphor has not been lost on people who are confused or put off by Bitcoin and other digital currencies. They’ve started using Bison Dollars as a jokey way of discussing the rise of cryptocurrencies.

Is it wrong that this is where my brain goes when people talk about #cryptocurrency? pic.twitter.com/ej1ZzbmxgD

Of course, Bitcoin’s true believers, those who encourage holding the currency no matter what happens, will dismiss this as more FUD (“fear, uncertainty, and doubt”) from “NoCoiners.”

But maybe it’s the NoCoiners who will have the last laugh. If Bitcoin crashes down to nothing and M. Bison successfully kidnaps the Queen of England and blackmails the treasury, those who opted to hold Bison Dollars are going to look pretty damn smart.