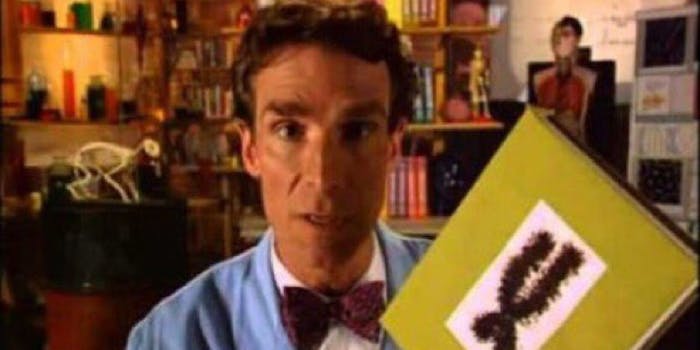 The truth about that viral Bill Nye screengrab

Nye never said "gender is determined by your chromosomes."

Bill Nye, the Science Guy, is back in his new Netflix series, Bill Nye Saves the World, and the internet is filling up with choice screengrabs of Bill (Bill! Bill!). One of these viral quotes has become especially controversial, because it seems to show that Nye, beloved by science-respecting liberals, is a hypocrite on issues of gender. Don’t worry, though, friends of Bill, because it’s a big ‘ol fake.

Here’s the meme that seems to show Nye in 1995 claiming that gender is strictly a matter of chromosomes, then changing his mind on the new show, coming around to the position that gender is a spectrum.

The middle graphic, of money changing hands, implies that Bill Nye was paid by someone, perhaps some liberal “social justice warrior” cabal, to take a more trans-friendly position. The thing is, Nye never took the gender-essentialist position in the first place.

“Nye never said, ‘Gender is determined by your chromosomes’ in that particular episode of his old show. The text in the now-widely shared image comes via some random Internet user,” according to the Washington Examiner. The site linked to the old episode of Nye’s show, so you can see what he really said:

“Our genes are stories in parts of our cells called chromosomes. Chromosomes contain all of the genetic information; all the instructions you need to make a person. Now humans have 23 pairs of chromosomes for a total of 46. It’s like the instructions are stored in 46 books and the books are divided into chapters, and each chapter is like a gene.”

Nothing about gender there at all.

What appears to be the first instance of the Bill Nye genders meme was posted to Reddit’s r/dankmemes, where posters tend to be obsessed with, and make jokes about, the idea that “there are only 2 genders.”

In that environment, this bogus Nye meme was a surefire way to gain a pile of Reddit karma, the site’s “fake internet points.” Indeed, it made it nearly to the top of the subreddit and garnered more than 400 comments (most posts don’t even crack 10).

Many of them pointed out that the top screengrab is fake, but some just expressed disappointment in Nye for ruining their childhoods with his progressive-ish ideas about the gender spectrum.

The original poster, not_liquid, acknowledged that the caption on the older screengrab was fabricated, but defended his meme regardless:

The last quote in the meme, about Nye believing gender belongs on a spectrum, is real. Because scientists are woke.