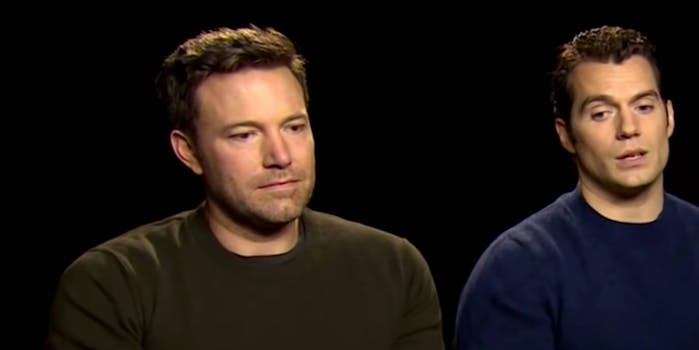 Nearly a year has passed since the Sad Affleck meme graced the internet and Ben Affleck himself is still not over it.

You know the one—the clip of Affleck and Henry Cavill mid-press junket, being asked about the negative reviews for Batman v Superman: Dawn of Justice. Cavill takes the heat, but his answer slowly fades as the camera zooms in on Affleck’s sad, sad disposition, Simon & Garfunkel’s “The Sound of Silence” punctuating the disappointment in his face. Yes, that Sad Affleck meme.

While Universal Music blocked the original video, which had received 22 million views, some kind internet vigilante uploaded the version above for all our Sad Affleck needs.

Now, 10 months later, Affleck aired his meme grievances while on another press junket, this time for his new movie, Live By Night. Speaking with BBC Radio 1, Affleck was pretty ticked off when asked what working on Batman v Superman taught him.

“It taught me not to do interviews with Henry Cavill where I don’t say anything and they can lay Simon & Garfunkel tracks over it. That’s one thing I learned,” Affleck said.

I suppose we can assume that he never saw the remastered Sad Affleck meme with the Curb Your Enthusiasm theme. Because that one is even worse.

That moment when you realize your Batman movie is getting worse reviews than your Daredevil movie pic.twitter.com/ebHvaPvyqT