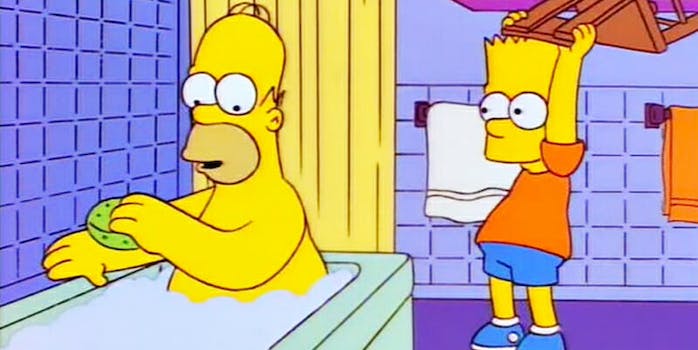 With nearly 30 years and over 600 episodes to draw from, shitposting memes from The Simpsons has become ever the popular trend on the internet in recent years, with an entire Facebook group dedicated to the phenomenon. And as we’ve seen in the past, these Simpsons memes don’t exactly have to make sense to be effective—in fact, the less sense the better. Such is the latest to take over the internet, highlighting a decades-old scene in which Bart hits Homer over the head with a chair while he sits in the bathtub.

The clip originated from the 1996 eighth season episode, “A Milhouse Divided,” which sees Bart’s blue-haired sidekick’s parents divorce. Milhouse’s mother Luann quickly rebounds with the American Gladiator “Pyro” (an apparent spoof of the real-life Gladiator “Nitro”) who—to the delight of the boys—lets Bart hit him over the back with a chair.

Bart later attempts the stunt on his own father with decidedly mixed results, as you can see in the original scene below.

Last month, the clip caught the attention of Simpsons fans who began circulating Photoshops, GIFs, and edited videos of the meme on social media. The first version of this meme that went big was likely this one about Toto’s hit song “Africa,” which was posted on Facebook:

From there it took off, becoming more elaborate and meta—such as the one below which plays off of the Bruno Mars chair meme:

Or this more recent one, which transforms Homer’s anguished howl into the opening key of “Circle of Life” from The Lion King.

Not to mention the plentiful video game mashups, of which were some of the more popular examples.

Of course, there was also a relevant and obligatory Avengers: Infinity War gauntlet reference.

And finally, the chair meme hit its peak with a “This Is America” reference.

As the saying goes, they’ll never stop The Simpsons.