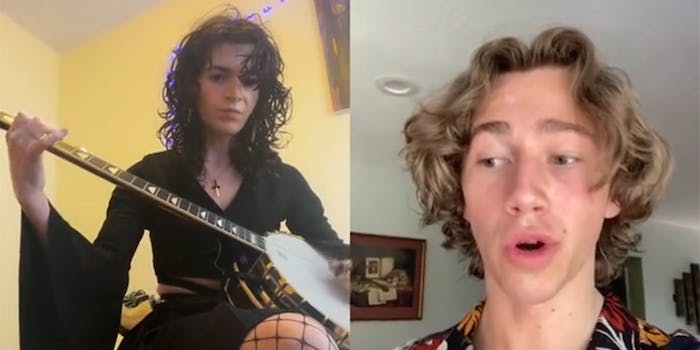 ‘Is this eligible for a Grammy?’: Banjo player shuts down anti-abortion TikToker who tried to shame a woman

'Can we start a go fund me to make sure you do this full time?'

A viral TikTok shows a banjo player drowning out an anti-abortion conservative who tries to shame a woman pouring a big glass of wine after announcing an appointment to terminate her early pregnancy.

In the first video, posted by @kai.clips, a woman feigning tears holds up a positive pregnancy test and says, “What am I gonna do? Just kidding; I already scheduled the appointment.”

She’s evidently joking and trolling conservatives. She laughs and starts pouring a glass of rosé: “I am what conservatives fear!”

But then @kai.clips goes into a rant about his re-positioning on abortion via TikTok duet. He claims to have watched “hundreds of videos of women taking joy in killing their children.” He declares abortion “evil” in some weird and patronizing blanketing of the practice.

To this point, @hillbillygothic replied to the video by drowning out his paternalism with an intense banjo solo.

One commenter said, “As someone who knows this guy personally…thank you so very much.”

Another asked, “Can we start a go fund me to make sure you do this full time?”

“Is this eligible for a Grammy?” asked another said of the banjo jam. “I feel like this should win a Grammy.”

The Daily Dot has reached out to the banjo player, musician Clover Lynn (@hillbillygothic), for comment, who says “I just play banjo and some people like it.”

“I’m not the first person to [drown out his voice] and his video is still more popular than mine; I doubt he really cares.”