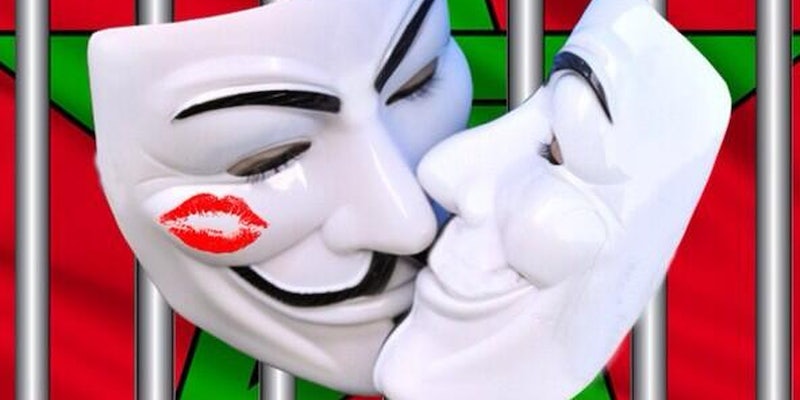 Teen kissers in Morocco have an unexpected ally in Anonymous

It's not twerking. It's not grinding. It's still indecent enough to have three teens facing two years each in prison.

It’s not twerking. It’s not grinding. It’s still indecent enough to have three teens facing two years each in prison.

It’s a kiss in the country of Morocco. And it’s about to become much, much more famous.

#NadorKiss is an international operation to raise awareness of the plight of the three teenagers from the northeastern city of Nador: a 14-year-old girl, her 15-year old swain, and their 15-year-old mutual friend, who took the now-infamous picture of them kissing in front of their school. The hapless teens then posted it to Facebook, where, predictably, all h*** broke loose when the authorities found it.

The boy in the photo told Nador City news, “A week after the pictures were posted, we were immediately arrested. Human rights associations demanded the arrest. And it is not their business in the first place.”

I’ve developed a complex because of this. And this is really sad. People make fun of me in the street, at school, at home and everywhere else. They blame me for spreading indecency even if it was the girl who shared the pictures, not me. … If I knew that the kiss would cause such a[n] outcry, I wouldn’t have indulged in such a relationship with the girl.

The youngsters were released after a weekend in custody, pending trial. That trial begins in two days, on Nov. 22. In the meantime, Anonymous took up their cause, hacking the Department of Water’s website and threatening to do much more. Their focus was on the way this case highlights the imposition of localized mores on what Anonymous sees as a global frontier: the Internet. A press release outlined Anonymous’s point of view:

This is yet another example of a government taking something that wouldn’t normally have been a major issue but by removing it from the usual framework it would be viewed within simply because of the “online” aspect, it is made into a “problem.”

Today, Anons and non-anons team up in two tweetstorms: at 7pm and 10pm ET. The goal is to force the hashtag #NadorKiss to the top of the international trending charts, drawing the world’s attention, and possibly political pressure, to bear on the court in Morocco.

This newest release announcing the tweetstorm includes the specific tweets to be included (copy/pasted, as mere retweets don’t help in trending statistics), and lays out the call to action. “Time to be heard!  Make no mistake about it YOU can make a difference. Morocco reversed its pardon of a pedophile based upon social media pressure so let[‘s] do it again.”