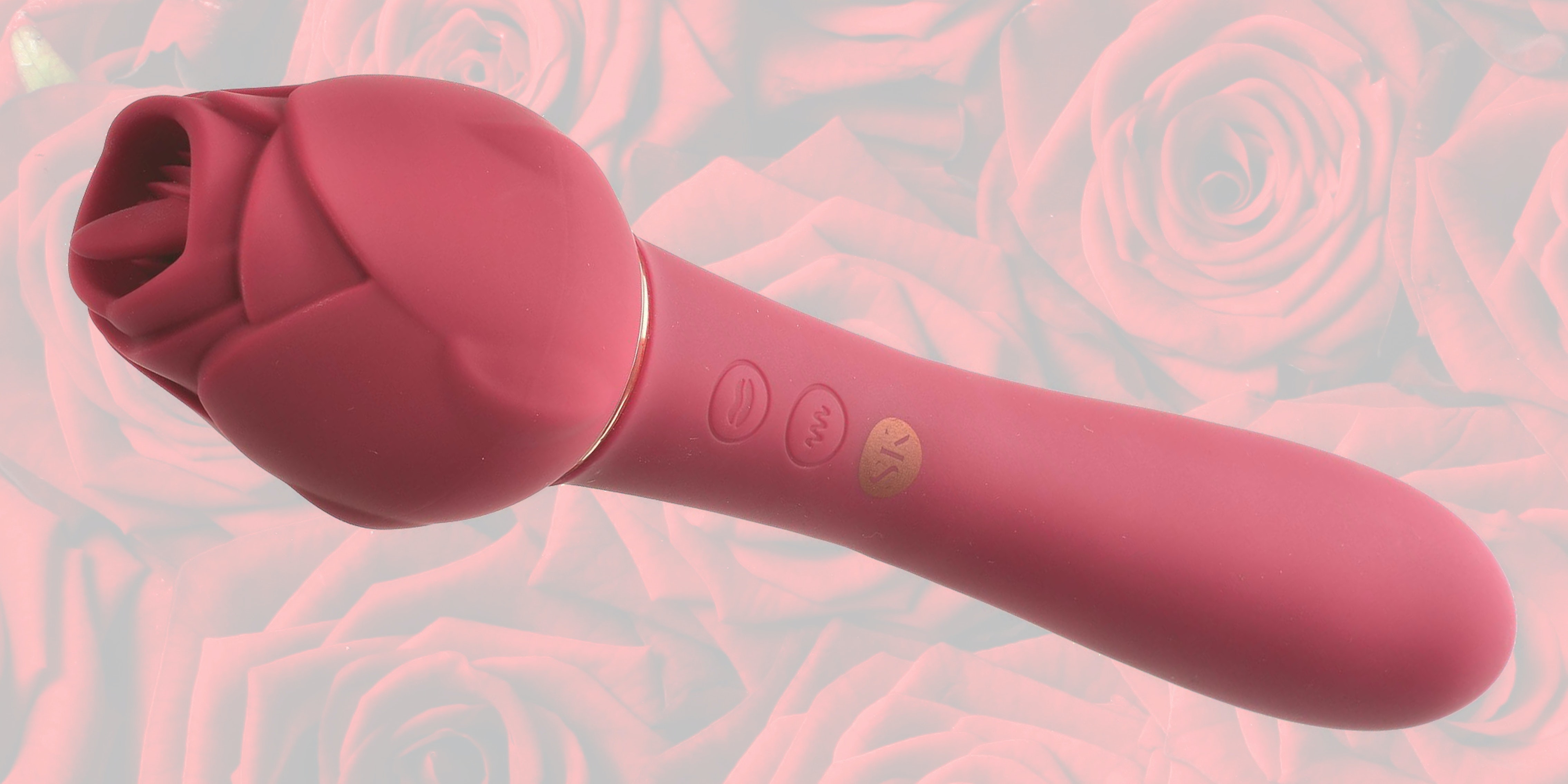 The viral treat is as good as you heard.

TikTok was abuzz with a toy that was not only aesthetically pleasing but also brought users to multiple orgasms quickly—something most vulva owners were thrilled to share.

So it comes as no surprise a ton of copycat rose vibrators flooded the market in no time. They all claim to do the same thing or better, but can they really be as good as the original?

What is the Rosegasm Lingo Dual-Ended Clitoral Vibe?

The Lovers Lingo Dual-Ended Clitoral Vibe isn’t in the style of the viral sucker. Instead, it goes a couple of steps further, mimicking oral sex on one end and penetrative pleasure on the other. The “tongue” is discreetly nestled within the folds of the rose design, making it aesthetically pleasing. While this toy isn’t as easy to leave lying out disguised as an objet d’art like its viral counterpart, it’s still beautifully rendered.

Stewart says, “Some of us have been conditioned that phallic items aren’t sexy, so when we find something that is aesthetically pleasing, it helps us to reduce the tension and shame and increase the pleasure. Also, having our toys out can help us to remind ourselves of our own pleasure and how it needs to be prioritized in our everyday lives. When we don’t see something (when it’s in a drawer for example), we may forget it’s there. So if anything, having it out and on display is a great thing.”

The toy’s total length is 8 inches, with a width of 1.6 inches. It’s splash-proof, however, you shouldn’t submerge it completely in water. The toy charges by magnetic USB connection and comes with a charging cable and storage bag.

Pros and Cons of the Rosegasm Lingo Dual-Ended Clitoral Vibe

Beginning on the lowest vibrating setting, the tongue flicking feels nice but moves a bit slow for my liking. Next, I turned things up and found myself at the highest setting fairly quickly. It doesn’t feel exactly like a tongue, but it’s pretty close. On the fastest setting, I would say it’s akin to your lover quickly flicking the tip of their tongue against your nipples. Using lube is an absolute must.

Applying lubricant to my clitoris, I decided it was time to turn up the heat and get down to business. I turned down the vibration to the third highest setting and quickly found I needed to go back to the highest to really feel things. Your mileage may vary, but this is what I needed to get the feel of a tongue licking my clitoris.

The tongue portion of this toy is rather short, which I believe is a design flaw. I understand it would look rather silly to have a long tongue sticking out of the rose for aesthetic purposes. But for the purposes of pleasure, I think it needs to be a bit longer than it is. All bodies are different, however, so if your clit isn’t buried beneath the folds, you may find the length fine.

I was able to orgasm using the tongue end of the vibe eventually, but the tongue length and having to adjust my grip made it a bit of a struggle. Unfortunately, my initial concern about the insertable end being a bit less firm than I like proved warranted. Using it as a handle proved challenging. I eventually held it by the base of the rose. (In retrospect that’s probably the proper way to hold it anyway.) I will note, I have some grip and hand issues that cause limitations due to an autoimmune disorder, so being able to accommodate that can be nice.

After orgasming with the clitoral stimulator, I moved on, flipped the toy, and tried some penetration from the insertable end. I’ll be honest, I don’t usually care one way or another about patterns when it comes to a toy. I usually find a vibration speed I like and stick to that, as patterns tend to distract me. I’m sure there are people out there who like the patterns so for you folks, there are patterns available! I scrolled through and found a speed I thought would be nice and inserted the toy.

The toy in this regard is just okay. It might be perfectly fine for others, but for me, it’s just not firm enough to do the job. I am one of the luckier women who can orgasm from penetration alone. However, there’s a pretty specific set of things that need to occur for that to happen and this toy just doesn’t do them. Even adding additional clitoral stimulation to the mix wasn’t good enough. So I quit while I was ahead and decided to be happy with the fact I now own a toy that can mimic oral sex when I don’t have a lover around.

Who should buy the Rosegasm Lingo Dual-Ended Vibe

If you’re in the market for a new sex toy that’s pretty and functional, this item ticks both boxes. I think it would be great for anyone who’s new to sexual wellness products and wants to spice things up in the bedroom with their lover or try something on their own. Something I found to be a con—the less-than-firm insertable end—could be a pro for someone who’s new to using sex toys, or someone who’s dealing with an issue like vaginismus and finds insertion painful.

When speaking with Stewart, I asked what advice she had for newbies just starting out with sex toys. She said, “Try a few different ones to see what kind of toy you like! There are so many innovative toys out there, it’s really about practicing with each one. Remember, it’s important to use them when you have time for yourself without any interruptions. And of course, to use them with a water-based lube (for silicone toys) to ensure that you maximize your pleasure.”

Overall, I enjoyed this toy and recommend it if you’re interested in mimicking oral sex or want nipple stimulation. You can grab yours today from Lovers.