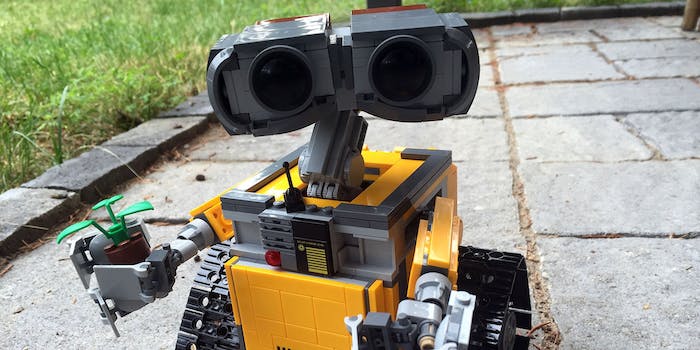 In Japan, people hold funerals for robot dogs when they conk out. In North America, four out of five Roomba owners name their robot vacuum cleaners. In pop culture, R2-D2 is arguably the most beloved Star Wars character.

There are reasons we have these affections for machines, even fictional ones. If designed properly, robots can be just as lovable as pets—with far more utility. If they exhibit a bit of personality, even better.

So it is with WALL-E, star of Pixar’s eponymous 2008 Oscar-winning animated movie. WALL-E himself is a box-shaped robot charged with the unenviable task of cleaning up the planet while the humans who polluted it beyond recognition sail the heavens in an enormous space cruiser. The diminutive worker bot goes about his job dutifully until he meets and falls in love with EVE, a sleek and mysterious new robot with her own mission.

WALL-E checks all of the appeal boxes, and up there with R2-D2, he is already one of pop culture’s most revered robots.

It’s somewhat surprising, then, that it has taken so long for a Lego version to become a reality. But Lego WALL-E finally arrives on Sept. 1, and the wait has been worth it. Indeed, he may be the most emotionally evocative Lego creation yet.

Measuring just seven inches tall and composed of only 677 pieces, Lego WALL-E is a relatively small set. But, as the saying goes, it’s big on personality. 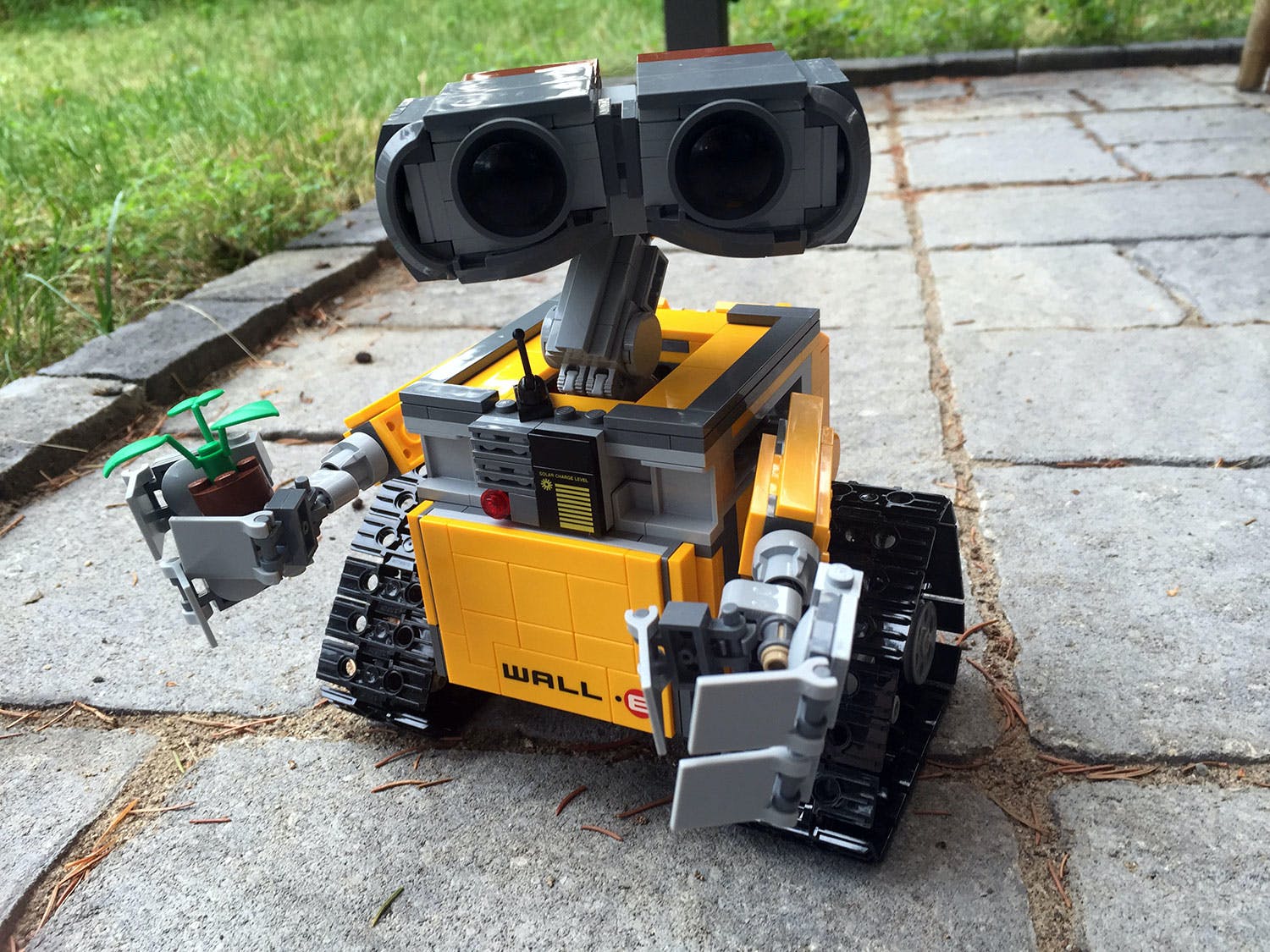 The set features most of the robot’s key features. His two triangular tank treads roll as he moves, his front door swings open and his arms swivel and move backward and forward. His hands clasp items, such as the included “last plant on Earth,” and his head swivels around and up and down. Most importantly, his eyes, which contain virtually all of the movie robot’s expressive personality, are positionable. 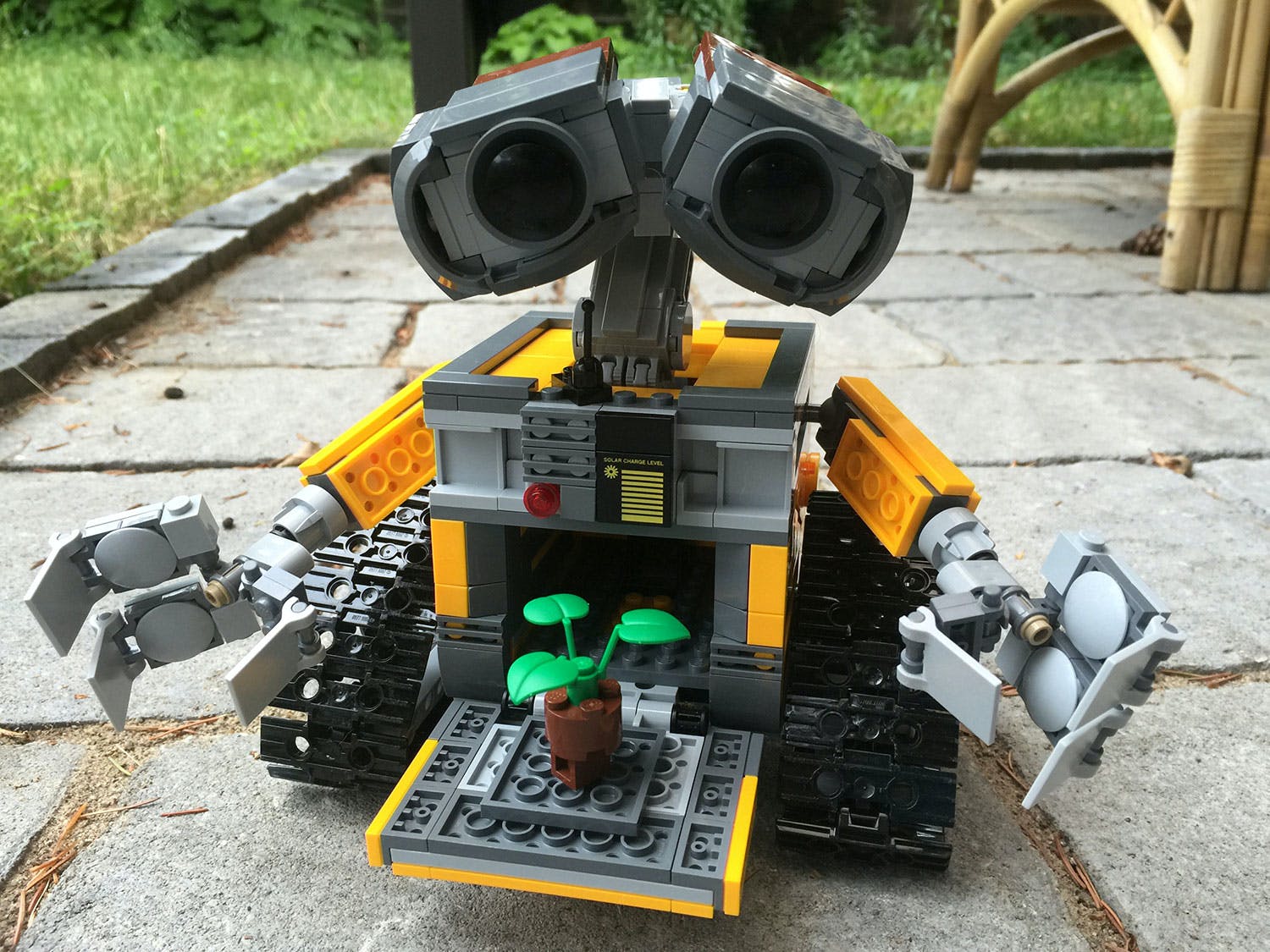 It’s with the eyes that Lego WALL-E can be made to look sad, curious or puzzled, just like his film counterpart. With that, it’s hard to think of another Lego set that can convey such a range of emotion.

It’s a masterfully designed set, thanks to its pedigree. Lego WALL-E is the brainchild of one of the character’s creators, Angus MacLane, the directing animator on the film.

MacLane, a lifelong Lego fan, began building his WALL-E in 2005 at around the same time the character was being designed in Pixar’s computers. The color scheme hadn’t been set yet, so the plastic version was a light gray. MacLane wasn’t entirely happy with his build because the tank treads he was using were too small and flimsy. When production on the film ramped up, he set it aside.

Years later, a new Lego bulldozer set provided the treads he was looking for, so he rebuilt WALL-E in the correct color scheme. In October 2013, he decided to submit it to Ideas, Lego’s incubator program for fan creations.

Under the Ideas system, fans submit their own builds and try to muster crowd support online. Those that get the most votes get consideration by the Danish company. Designers whose submissions ultimately go on to become products get a 1 percent royalty on sales, not to mention eternal bragging rights for having created an actual Lego set.

So far, sets based on Back to The Future, Ghostbusters, and The Big Bang Theory, among others, have graduated from the program. MacLane didn’t have much trouble attracting supporters, with his creation reaching 1,000 backers in December 2013.

WALL-E has been a hit with Lego enthusiasts since even before the film’s release. Marc-Andre Bazergui started building his own replica in 2008 after he saw a poster for the movie in a bus shelter near his apartment in Montreal. Bazergui, known as “Baz” in the enthusiast community, made his fully functional WALL-E out of Technic and Mindstorms robots components.

Videos of that creation and subsequent follow-ups have since garnered hundreds of thousands of views. Bazergui, whose day job is in tech support for IBM, now travels to robotics conferences around the world to show off his WALL-E builds.

Upon learning of MacLane’s Ideas submission, Bazergui began rallying support for it. Although the Pixar designer’s creation was more of a traditional Lego set, rather than a Mindstorms robot, it was clear that an official product had to happen.

“Everyone was looking up to Angus as the ultimate WALL-E,” he said. “When you realize who he is and how true to nature it is, of course you’re going to support it.”

Lego green-lit the project and put designer Steen Sig Andersen on it. Andersen and MacLane began collaborating on a set that would be more commercially feasible than the original.

“Designing a Lego model for yourself is one thing, but there are many more factors to consider when designing a model for a mass-market product,” MacLane said in an email. “Piece count, playability, and stability were all things that I had to consider when my model was translated into the official set.”

The duo went back and forth, swapping Lego Digital Designer files between Denmark and California, with tweaks being made to various parts of the original model. Andersen added playability with the moveable arms and swinging front door, before the set went to stability testing.

The head, unfortunately, failed several stress tests, requiring a return to the figurative drawing board.

“Steen ended up completely re-engineering the head to maintain the look of the original, but stand up to the rigorous stability requirements,” MacLane said.

In the end, WALL-E went through 23 iterations—a lot for an Ideas project, MacLane added, although that was because of Pixar’s involvement. The studio officially blessed the project, giving MacLane the right to approve it or not.