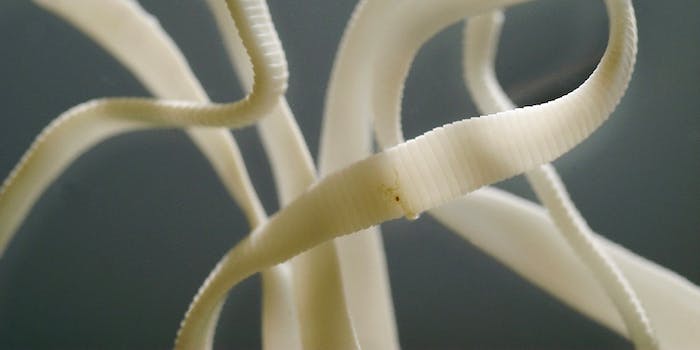 A BBC reporter gave tapeworms their 15 minutes of fame.

Would you swallow parasitic tapeworms in the name of science? BBC reporter Michael Mosley did. We have him to thank for this fantastically terrifying video tour through his small intestine, where we meet not one but three tapeworms in residence.

Tapeworms are a class of flatworms that parasitize critters as diverse as humans, lemmings, and whales. They’ve been with us for a while—a group of researchers based in Brazil found tapeworms eggs in some 270-million-year-old, fossilized shark poop. Seriously.

The long, thin body of a tapeworm is made up of individual segments called proglottids. Each proglottid contains male and female parts and can self fertilize.

“The whole of the segment will eventually become full of eggs. It will eventually detach from the worm and pass out in the fecal material and that’s how the animal reproduces,” explains Mike Rogan, the video’s narrator and a parasitologist at the University of Salford, Manchester, located in Salford, England.

Mosley swallowed three tapeworm eggs, called cysts, as part of a program for the BBC called Infested! Living with Parasites. Several weeks later he gulped down a specialized pill with a tiny camera to check out his new body invaders.

Each swallowed tapeworm grew to about three to six feet long in those weeks, Rogan estimates in the video. Mature beef tapeworms (the kind Mosley had) can grow to 30 feet. The typical human small intestine is 22 to 23 feet, so tapeworms tend to fold and curl on themselves as they snuggle into the intestinal walls.

You too can get your very own tapeworms if you eat uncooked meat from an infected cow or pig (or lemming I suppose, but I’m going with the obvious routes here). Doing this is not recommended, however: Most tapeworm infections are relatively harmless, but in rare cases the worm can migrate elsewhere and cause major problems in your brain, heart, liver, or eyes.

The idea that tapeworms can help you lose weight is likely bogus. Mosley gained two pounds during his infection. “It could be that the parasite increased my appetite. I ate a lot of chocolate,” he told the BBC.