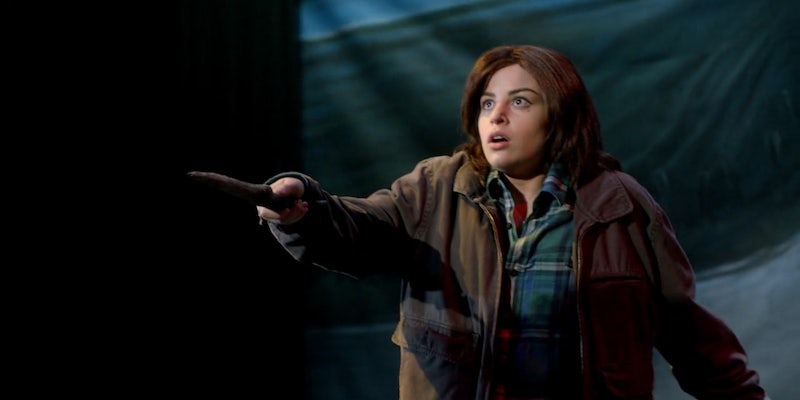 Supernatural’s 200th episode is a fitting tribute to its fangirls

It's taken this long for ​SPN's legions of fangirls to get an episode that didn't mock them for what they love—and it was more than worth the wait.

Most shows that survive to the ripe old age of 10 are not works in progress. They are generally longrunning powerhouses that have found a formula and have stuck to it. But if Wednesday night’s 200th episode of Supernatural (SPN), “Fan Fiction,” taught us anything, it was that even the hoariest, most testosterone-filled chestnuts can grow and evolve.

In Supernatural‘s case, the evolution has been—dare we say it?—a progressive one, a steadily shifting narrative that seems to be ever-so-slowly moving away from the many years of geek-shaming and repudiation of its mostly female fandom. We might even be moved to call it a feminist evolution. Chalk it up to SPN‘s musical episode. We like singing and dancing. But even more, we like fangirls, fandom, and the celebration of fanwork. Tuesday night’s episode was not only a celebration of the creativity and energy of female-based SPN fandom, but a validation ten years overdue.

When the CW announced over the summer that the 200th episode would be a musical episode entitled “Fan Fiction,” fans were immediately skeptical. The actual episode, which centered around a group of excited high school girls putting on a genderbent production of Supernatural: The Musical, could have been a 50-minute embarassment of fan-shaming and jokes at the expense of SPN‘s core fans. Until Wednesday night, there was every reason to believe that it would be just that.

SPN is a case study in interacting with fans through deliberately meta episodes that involve the characters coming into contact with fans of theirs. The track record of these episodes is beautifully bizarre, including one Season 5 portrayal of a fan convention that was almost entirely composed of male attendees—that is, the polar opposite of what an actual SPN convention looks like.

Then there was Becky, who for a long time was the show’s only representative fangirl. Portrayed as delusional, possessive, and obsessive, Becky was almost as bad for real fangirls’ morale as the constant shaming of slash fans, particularly those who shipped heroes Sam and Dean Winchester, i.e. Wincest. In another fifth-season episode that was, oddly enough, nominated for a GLAAD award for positive representation, the show introduced two minor characters who roleplay as Sam and Dean at LARP events. These characters later reveal the truth to the real Sam and Dea: They view the brothers’ subtextual relationship as a mirror of their own real-life queer relationship. Though GLAAD evidently viewed this episode positively, the fictional brothers Winchester are, of course, grossed out by the implied gay incest.

The introduction of Felicia Day‘s character Charlie in Season 7 as a smart, no-nonsense LARPer and fan seemed to be a major turning point in the show’s portrayal of fans, specifically fangirls. (It also helps that Day’s character is one of the very few recurring female characters on the show who has yet to die.) But just as Felicia Day herself represents a facet of women’s participation in geek culture that male gamers and fanboys find acceptable, her character had nothing to do with the fictional Supernatural fandom that exists in the SPN universe. Charlie was able to be a fan of things like RenFaire and gaming, which were removed from the show’s meta-commentary on itself and its fandom. That disconnect also allowed Charlie to find a special bond with Sam and Dean, who even fully participated in her fandom activities at one point.

Since introducing Charlie, Supernatural hasn’t returned to a direct look at its fandom with the kind of earlier meta-commentaries we were used to. This is very likely because fans hated those episodes. But last season we began to see promising attempts to complicate the show’s own narrative about fandom. The major example was the meta-commentary around the season’s archvillain, Metatron, who was essentially defeated once and for all by a fictional narrative he couldn’t control. But there were still other troubling moments. Charlie got an episode in which her deep knowledge of The Wizard of Oz canon was countered and trumped by an encounter with the real Dorothy, who told her everything she thought she knew about her favorite characters was wrong. Toward the end of the season, Sam and Dean broke the fourth wall for a direct, scathing message to fangirl shippers: 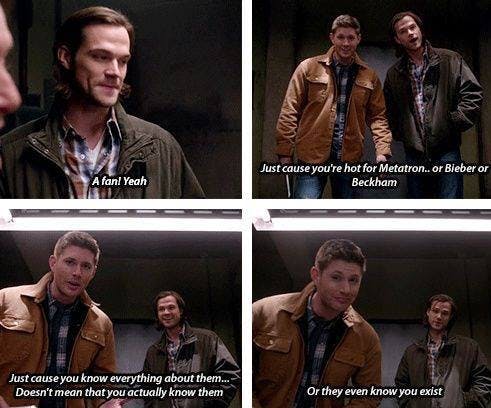 Here too, the dominant theme of SPN‘s message to its own fans was that everything they thought they knew about the show, especially its characters, was wrong.

With all of that baggage leading up to the 200th episode, it’s easy to see why fans were nervous. But Wednesday’s SPN managed to do something that no other meta-episode in the series’ history has accomplished: It put Supernatural fangirls take center stage, letting them tell their own story and reject Dean’s flustered insistence that they’ve been doing it wrong.

“One of my friends is watching the SPN fanfic episode,” Daily Dot writer Gavia Baker-Whitelaw emailed me as I was writing this, “and she said it’s fucking nuts and amazing.”

That’s totally accurate. “We had absurdly high expectations and it delivered on every single one,” Tumblr user thewinchestercave wrote on Wednesday.

“Fan Fiction” subverts all the familiar (and disappointing) beats of every other meta-episode SPN has done. Sure, Sam and Dean wander around side-eying the crazy fans, their hilarious slash subtext, and their ideas that have nothing to do with the reality in which they live. But this time, the show makes it clear that the fans aren’t the problem. When Dean tries to explain to our fangirl in charge, musical director/dictator Marie, that she’s wrong, she shoots him down. “That’s the worst fanfic I’ve ever heard,” she says, describing his version of “canon.” Later, when Sam and Dean insist that they’re real, she and another fangirl react with laughter and disbelief.

It took five seasons for us to finally get a counterpoint to delusional, lost-in-fantasy Becky as the show’s resident fangirl, but now we’ve got a whole ensemble of counterpoints, and they’re great.

When Dean does his usual homophobic bit, freaking out over implied homoerotic relationships between first Sam and Dean and then Dean and Cas, Marie just rolls her eyes at him and continues to write slash fiction. In a word, it’s fantastic. There’s a sense, as there always is when Supernatural brings in slash, that the show is mocking the shippers. After all, Wincest will never become canon, and it’s highly unlikely that Destiel will. But while SPN used to make a point of mocking these ships, something has definitely changed.

Near the end of last season, a scene intended to mock the idea of Destiel was edited out of the final version after the actors all agreed that it wasn’t true to the spirit of the show. In “Fan Fiction,” while Dean’s discomfort over Wincest and Destiel is still present, it’s not really played for laughs. Instead, Marie’s reaction makes Dean, not her or her ideas, the brunt of the joke. He’s the one who needs to relax, the one who doesn’t get that what’s going on around him is cool. Just as Metatron’s attempt to control the narrative of his ascendance to godhood last season fell by the wayside, so too does Dean’s objections to the ideas that fans have about his relationships with the men in his life.

The plot, a silly monster-of-the-week story involving a vengeful theatre muse, explicitly repudiates the lesson from last season’s “Slumber Party” about Charlie’s Oz fandom. This time, instead of being told to unlearn everything she believes about the universe she loves, our fan, Marie, is informed that her belief in the world of her fanfiction is a literal life-saver. Moreover, the show’s explicit embrace of Marie and her narratives is the long-missing link between the canon and its fans.

In the episode, Marie proudly declares that what she and her fellow fangirls are creating is a “transformative work,” a phrase that has serious significance in discussions about the artistic and legal validity of fanfiction. The show also pays homage to noted SPN fangirl and acknowledged SPN fanfic writer SE Hinton. Hinton’s iconic young adult novel The Outsiders gives SPN a run for its money as a testosterone-fueled drama whose male bonding is often outstripped by its homoerotic undertones. The tongue-in-cheek implication is that fandom, fangirls, and their transformative works are everywhere.

This is as meta as it gets. It’s also SPN at its sharpest, its most on-point, and its most fun. From the moment Dean gives a stirring speech instructing shippers (and the audience by proxy) to slash their hearts out, to the moment Marie sings a stirring anthem featuring the refrain “a single mantear slips down his face,” it’s clear that we’re not in Lawrence, Kansas anymore. We’re also a long way from Season One and Supernatural‘s early relationship with its fans.

But if the road to acceptance and affirmation of SPN‘s female-driven fan culture has been a long, rocky one, the journey has been worth it. In the end, Marie doesn’t just control her own narrative; she ultimately gets to be the hero of her own story. She shifts the plot—the actual plot of the “real” Supernatural—in a way that is both tiny and huge, by insisting on the resolution of a plot point that’s insignificant except in the hearts of the show’s fans, to whom it matters perhaps more than anything else that will happen this season.

After so many years of feeling mocked and scorned by SPN‘s inconsistent attitude towards its fandom, it’s hard to articulate how gratifying this episode is, with its focus on a female fan whose passion is explicitly encouraged and explicitly influential. If Supernatural gives us nothing else for the rest of Season 10, “Fan Fiction” will have been more than enough.