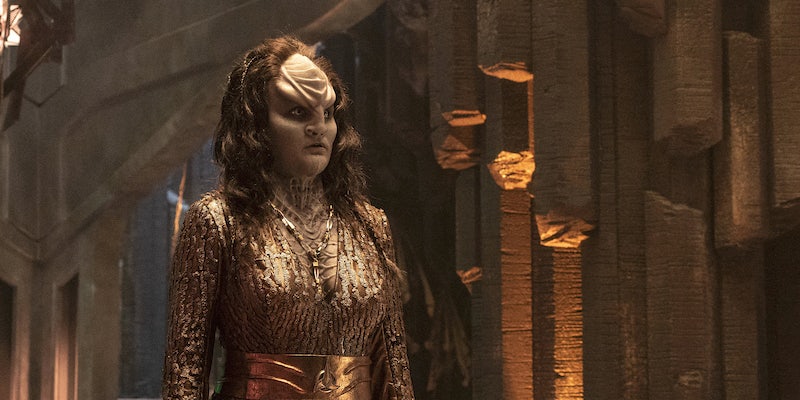 The Klingons have hair again—and there's a canon explanation for that.

When Star Trek: Discovery gave the Klingons a makeover last year, old-school Star Trek fans saw the move as pretty controversial. The Klingons had already changed a lot since their first appearance in 1967, and people were pissed about Discovery giving them yet another new look.

So for season 2, the show has decided to dial things back. Starting with this week’s episode, the Klingons will look more like they did in The Next Generation.

Each Klingon redesign has a simple real-world explanation: better makeup and prosthetics. The 1960s Klingons were essentially humans, but the original feature films and 1990s Star Trek had the budget and expertise to develop a more alien look with ridged foreheads and bushy wigs. (Those costumes also involved white actors wearing brown facepaint, a compelling reason to shake things up for Discovery.)

Star Trek Into Darkness (2013) revamped the Klingons again, making them bald and reptilian. But a lot of Trek fans hate the reboot movies, which caused a problem for Discovery. If Discovery also featured bald Klingons, it had a stronger visual link to the flashy blockbuster movies than the beloved TV franchise. This led to a weirdly intense animosity against Discovery’s Klingons, and the showrunners decided that alien makeup was not a hill worth dying on. Along with a newly upbeat tone, season 2 will reintroduce the Klingons looking like this:

In the trailer for Thursday’s episode, “Point of Light,” you can see more Klingons with long hair, creating a closer resemblance to their 1990s look.

Why do the Klingons look different in Star Trek: Discovery season 2?

In the grand tradition of sci-fi retcons, there’s a canon explanation for the Klingons’ new look. While the humanoid Original Series Klingons were retroactively explained as victims of a genetic disease, Discovery’s bald Klingons were apparently making a fashion statement.

“There is a reference to when [legendary Klingon hero] Kahless is brought back as a clone. The way he proves himself is he tells the story of how he cut off a lock of his hair and dipped it into a volcano and made the first bat’leth, with which he killed Molor, the terrible tyrant who was running Qo’noS at the time. We took that one little beautiful seed… and kind of expanded on that, and we see that in a time of war the Klingons would shave their heads, and in a time of peace, we start to grow it back out. I really love the symbolism of that.”

Not only is this an impressively deep cut into Star Trek lore, it’s an appropriate addition to Klingon warrior culture. With L’Rell as the new chancellor and the Klingon Empire in turmoil after the war, we’re going to see a lot more of these guys. Season 2 will introduce more of the Klingon “houses”—each with a different aesthetic and subculture—and other planets outside the Klingon homeworld, Qo’noS.

Editor’s note: This article has been updated to clarify the Klingons in the original Star Trek movies.