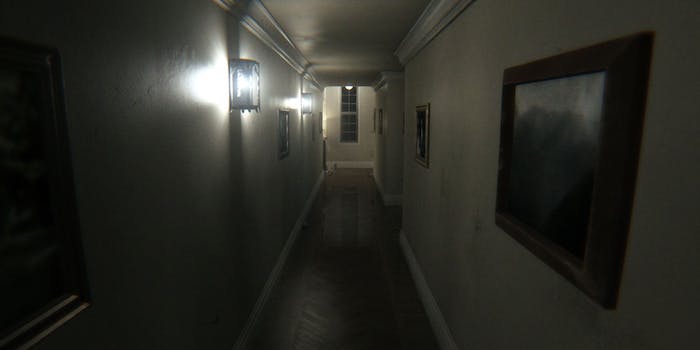 We played Guillermo del Toro’s P.T. to spare you the heart attack

Summon your courage—this interactive teaser is worth the scares.

Warning: This story contains spoilers for P.T. Mild swearing in some of the clips below may be considered NSFW. We recommend watching them in a dark room, while wearing headphones.

Thank God for cheat guides. My wife and I wouldn’t have finished the final puzzle in P.T. without them. We were too terrified to think straight after our stay in the hallway from Hell.

P.T. stands for “playable teaser.” It appeared on the PlayStation Network shortly after it was announced at Sony’s Gamescom press conference on Aug. 12, and is currently available for anyone with a PlayStation 4 to download for free.

It was identified as the work of 7780s Studio, and declared as the world’s first interactive teaser.

That sells P.T. short. It is a proper game, albeit a short one, and I think it will be remembered as one of the defining experiences of the PS4. It is the scariest horror game I’ve ever played. It makes the Resident Evil series look quaint by comparison.

What follows are a series of video clips taken on the PS4 during my playthrough of P.T. with my wife, Lesley. We kept the microphone on my PlayStation 4 camera turned on while we captured the footage. I’ve tried to avoid spoilers, like puzzle solutions and some of the nastier surprises.

You’re given no idea how you woke up in a cement room with only one door, covered in the hash marks of a prisoner who has been locked in the room for months. The single door leads to a hallway, through which you will loop endlessly until you solve the game’s final puzzle.

The graphics in P.T. are amazing. This was the first time I played a game on either eighth-generation console—the PS4 or the Xbox One—and felt like I was seeing a game that spoke to the new generation of hardware’s capabilities.

P.T. achieves the high bar of photorealism. An experience like this may have demanded such attention to detail, in order to create the suspension of disbelief necessary to draw the player in and make him or her vulnerable to the tricks P.T. wants to play.

The final door at the end of the hallway is not always open. There are sometimes puzzles you need to solve in order to open that door, and continue on to your next loop. The puzzles can be as simple as zooming in on an object and triggering an event.

P.T. is masterfully paced, handing the player little scares, just enough to keep them on their guard, and then allowing them just enough room to relax.

Maybe you saw something out the corner of your eye. Maybe not. P.T. practices the oft-repeated and perfectly-correct wisdom of Albert Hitchcock. Don’t show the audience everything. Let their minds fill in the blanks. They’ll probably come up with something worse than you could have.

Sometimes you don’t need to make anything up.

Sometimes a solution requires walking all the way down the hall and all the way back, and being given every reason not to want to be anywhere near the other end.

P.T. doesn’t repeat tricks. There’s no way to know what’s in store for you when the environment changes.

Most of the time P.T. is just creepy. It got under my skin, a sense of paranoia that had me whipping around to check the hallway behind me before I turned to face a desk or a chest of drawers to search for the new clue.

I was dubious about how scary P.T. was going to be until I read the pedigree of the people behind the project. One of them is filmmaker Guillermo del Toro.

Playing tricks on the audience’s perceptions and emotions through cinematography is an art that requires a filmmaker with imagination and experience. Guillermo del Toro is such a good choice for this kind of project.

The second part of the creative team that made me take this seriously is Hideo Kojima. Shigeru Miyamoto, the man whose imagination and playful spirit are behind Nintendo’s biggest properties like Mario Bros. and Zelda, is probably the most important Japanese developer in the industry.

Hideo Kojima, the developer of the Metal Gear franchise, progenitor of the stealth action game, and vice president of the storied publisher Konami Digital Entertainment is a close second to Miyamoto in the hierarchy of Japanese developers whose influence is felt industry-wide.

My wife and I had to ask ourselves the same question she asks in the video above. What the hell were we doing wandering around this hallway over and over again, scared shitless, when the solution to the game was readily available online?

Kojima said he expected the audience to take at least a week to figure out the solution to P.T. that would trigger the video at the end. He didn’t count on the collective brainpower and impatience of the gamer audience.

I have no idea how anyone figured out the solution to the final puzzle, but this guide my wife found allowed us to quickly finish P.T. Even with the help of a cheat guide, we still felt like we’d earned the video that finally revealed the project being teased by the game.

And there’s the final piece of the puzzle. If and when Norman Reedus’s beloved character Daryl Dixon on The Walking Dead gets killed, show producer and comic creator Robert Kirkman is going to have a riot on his hands. Reedus brings bona fide star power to Silent Hills.

If you’re not familiar with the Silent Hill series, they’re all set within the titular American town of Silent Hill and are works of psychological horror. The town shifts from a “normal” environment to a more terrifying supernatural reality throughout the game. The story almost always involves some act of horror, like a demonic suffering or a brutal crime, which is responsible for opening the door to evil in Silent Hill.

Once you’ve realized what P.T. is teasing, the game’s connection to Silent Hill is obvious. Through radio broadcasts you hear throughout P.T., you learn of a man who slaughtered his entire family, including his pregnant wife. The hallway shifts from a normal reality to a red-lit version, where the most horrific elements are prevalent.

The end of the credits to P.T. make it clear that the playable teaser isn’t connected to Silent Hills, for which a release date has not been announced, but I suspect that’s not entirely accurate. Based on having played games in the Silent Hill series, P.T. definitely gives the audience a taste of what Silent Hill is about.

That’s the most meaningful information a teaser can possibly convey. We will look back at P.T. as one of the high points of the PlayStation 4’s legacy, an experience available only on the system such that everyone without a PS4 is missing out.

I doubt I’ll ever play P.T. again, though. I’m all set with the heart attacks, for now.