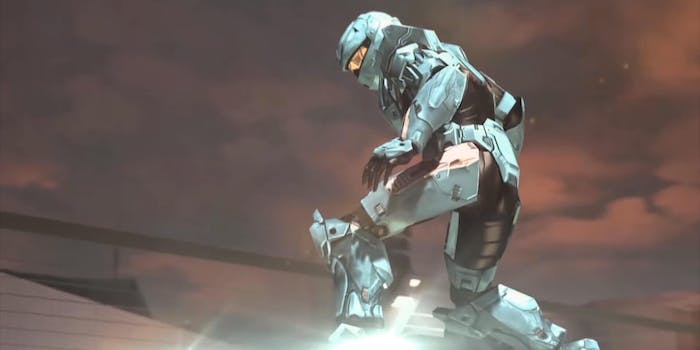 If there were ever two things that go perfectly together, it would be the Rooster Teeth animated series Red vs. Blue and booze. And the clever, biting comedy is now streaming on Netflix, which makes a good alcohol-fueled binge even easier.

The aggressively sarcastic series centers on two teams of incompetent soldiers, the titular Reds and the Blues, on their adventures which mostly just involve standing around. Although in some cases, the catty bickering is put on pause to include travels through space and action-packed fight scenes.

Through it all, however, you can count on the Reds and Blues to be their hilarious, blundering selves. Why not pair this goofy comedy with a drinking game or two?

Thanks to all the recurring jokes and callbacks over the course of 17 seasons of Red vs. Blue, even the older episodes lend well to drinking games–many of which can be found in the Rooster Teeth forums. You can always count of Sarge to threaten Grif nearly every time he appears onscreen, Simmons is still kissing ass and Caboose is still … well, Caboose.

Tackle the first five seasons with these carefully crafted Red vs Blue drinking games for maximum results–or, for a slightly more casual drinking experience–enjoy some of the later seasons with the same set of rules.

For a classic drinking game without a bunch of added rules or stipulations, look no further than NerdBurga’s creation in the Rooster Teeth forums. This carefully crafted drinking game is based around the first five seasons, but can easily be played during later seasons as well. Although there may not be any rules involving Felix or Polomo, you can bet that old jokes will circle back around.

The game features simple rules for casual fans such as requiring a drink when jokes are repeated, when polka music plays, or when there’s a team kill. But for the discerning viewer, the game also features a few more involved rules, as well.

Assuming the players avoid assigning shots to any of these rules, NerdBurga’s drinking game should get you feeling pretty good without anyone going to the ER.

For an even easier-to-follow drinking game, Sakurelf2 has you covered. There aren’t as many rules to keep track of in this one, which instead opts to assign extra drinks to certain rules.

Moments like Tucker complaining about the sniper rifle and Doc apologizing will only earn you a single drink, whereas other rules are far less kind. Three drinks are required any time Church says the word “hate,” which is honestly all you need to get blasted just one season in.

For added fun, head into the comments to find inspiration for a few additional rules, such as: “Anytime Codeword: Dirtbag is used–take a shot,” and “Every time someone mentions Red Bull, take a shot and chase it with some Red Bull.” The added rules can make this game much more interesting–as well as much more dangerous.

This Red vs. Blue drinking game is a beast. More than 30 rules populate this hefty version of the game, from simple rules such as taking a drink “whenever Simmons kisses ass” to far more complicated rules like “every time O’Malley comically mimics a James Bond bad guy, take a drink and go plot the destruction of the universe.”

The first few rules may look familiar, but with so many additions we can forgive a duplicate idea or two.

This game is for Red vs. Blue experts–as newcomers to the witty series will struggle to keep up with so many rules, particularly the character or trope-specific ones. Due to its length, however, this game is a great one for later seasons since many of the rules are less season-specific than some of the other Red vs. Blue drinking games. Plus, it varies the number of drinks required for each rule, which is sure to keep things interesting.

As usual, Reddit is chock-full of great content, and this collection of rules from a dedicated Red vs. Blue fan is of no exception. Simple, easy-to-follow rules make this Red vs. Blue drinking game the perfect choice for casual viewers or dedicated fans.

Simple rules like “drink when every character says either ‘son of a bitch’ or ‘fuck,'” and “drink when Tucker says Bow Chicka Wow Wow,” dominate this Red vs. Blue drinking game. Although there are only a handful of rules, they occur frequently enough that players should definitely get a good buzz going.

The creator of this drinking game warns players to “drink responsibly,” and then went and assigned between one and three shots per rule. One of the most detailed on the list however, this game is full of excellent call-backs and inside jokes.

To be fair, I-Am-The-New-L invites players to take shots of “water, soda, or if you prefer, alcohol,” so not everyone playing this game necessarily has to get wasted. Anyone planning to play the game with booze, however, might want to stick with taking a drink or three (rather than a shot) per rule?

The Daily Dot can’t compete with the countless Red vs. Blue drinking games out there on the internet, but had to get in on the fun anyway. It’s best to play this game on a weekend, however as going to work the following day is not advisable.