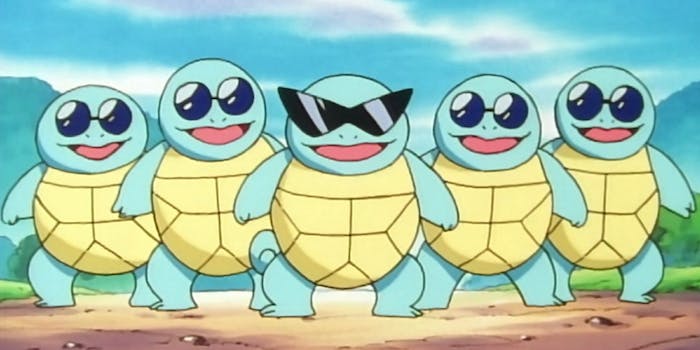 The Squirtle Squad is coming to Pokémon Go

Some of Kanto’s biggest badasses are about to appear in Pokémon Go.

Niantic Labs revealed Monday what players can expect on its next Community Day, and if you’re a fan of the starter Pokémon Squirtle, you’re in for a treat. While some of the bonuses include three-hour lures, the ability to hatch eggs in a quarter of the distance, and the ability to unlock a Blastoise who can use Hydro Cannon, one of the big draws is a stylish Squirtle that will be familiar to fans of the original Pokémon anime once you unlock Research tasks.

Attention, Trainers: if you complete Field Research tasks during Community Day, you may have a chance to encounter Squirtle sporting sunglasses. 🕶️ Good luck! pic.twitter.com/hacoIvzOCD

Technically, Pokémon Go is only offering players the chance to catch a Squirtle that is wearing sunglasses. But for fans who’ve seen early Pokémon, the sunglasses-donning Squirtle is a reference to the Squirtle Squad, a group of five mischievous Squirtles who liked to cause minor havoc in the episode “Here Comes the Squirtle Squad.” The leader of the pack, who had a pointed pair of sunglasses compared to the round pair worn by the other four, eventually became Ash’s own Squirtle.

The sunglasses Squirtle is similar to the many Pikachu variations we’ve seen since Pokémon Go’s launch (which have included a Santa hat, a birthday hat, and a witch’s hat, among others), making it the first non-Pikachu Pokémon to don an accessory in the game.

We doubt that these new Squirtles will cause as much trouble as the original Squirtle Squad, but they’ll definitely look cool beating your opponents—if you can get your hands on one.