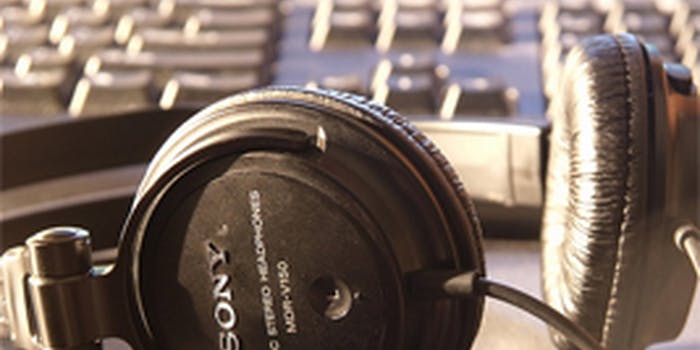 Do podfics—recorded versions of fanfiction stories—deserve their own pages on a popular fan wiki?

“It was always this wonderful experience to just curl up and be read to,” says podficcer bessyboo about her history with recorded literature and podfic.

Podfic is the fandom equivalent of an audiobook—fans reading fanfiction aloud. But while podfic fills a logical niche within fandom, it’s a controversial subject. Last week, what began as a technical question about how to edit the fan wiki Fanlore turned into a heated debate about podfic and its role within fandom.

“I think it’s one of those hit and miss things,” says Paraka, a fan who’s been recording podfic for several years. “[Some fans] enjoy podfic, or can recognize it as a fannish equivalent to audiobooks, but then there are others that just can’t wrap their heads around it.”

Paraka took issue when another fan on Fanlore attempted to edit an entry she had made on a podfic to include the fanfiction that it was based on, combining both the podfic and the original story under the same URL. The discussion on the wiki talk page centered around naming conventions on the wiki, and how best to disambiguate between a fic and a podfic of the same story.

When fans on Twitter got wind of the discussion, however, podficcers began protesting that podfics deserved their own pages on the wiki (an argument which Fanlore had never contested). Then anonymous fandom forum Fail Fandom Anon got wind of it, and launched a full-on debate about the legitimacy of podfic as a fanwork.

Paraka explains general dislike of podfic as stemming from personal embarrassment, among other reasons. “For some people, the idea of acting a fic out hits their stage fright or they just can’t imagine themselves doing it.” Others “can’t ignore the reader like they can the author, so they feel like there’s someone there with them as they absorb the story.” And still others “haven’t figured out how to listen in a way that works for them.”

Fail Fandom Anon was skeptical—as many fans involved in podfic discussions have been in the past—about podfics’ merits as independent works. “I’ll admit that I have a hard time thinking of podfics as original works,” commented one member of FFA. “[W]hen it come to fanlore I think it’d be simpler to just have one page per story and then link to all [its] formats, fic, translations, art, vid, podfic etc. from that single page. Having multiple entries for one story just seems counterintuitive to me.”

“I wonder how the fic author feels about the fact that the podfic is apparently oh so special and famous (with the fic itself being apparently unimportant compared to the reader’s performance),” said another.

Still another anonymous fan stated, “I think everything I’ll have to say on the subject boils down to the question, ‘Does the author of the fic deserve more credit than the podficcer?’, to which my answer will always be ‘Yes.’”

Fans of podfic, feeling battered by arguments likening them to unoriginal plagiarists and bad cover artists, rallied with a podfic appreciation meme, where appreciative readers and other podficcers could praise podficcers in comments. The creator of the meme, greedy_dancer, told the Daily Dot that the debate was nothing new for podficcers:

“I love podficcing with all my heart, but it’s tiring, feeling like what you do, like wanting to participate in fandom, is an ‘inconvenience’ to people. I only want to share my squee, but in order to do that we have to ‘fight’ for it, and podficcers are getting a reputation for being evangelists and trying to shove their ‘weird, creepy’ stuff down people’s throats.”

Meanwhile, Fanlore continued to work out naming conventions as Paraka took to the Fanlore community to consult with other podficcers.

Aethel, head of the Wiki committee at the Organization for Transformative Works, which runs Fanlore, told the Dot, “Fanlore wants and has always wanted pages that document individual podfics, as well as any other type of fanwork.” While Aethel notes that the size and reach of the discussion is unusual for the website, she also notes that it has been taken out of context due to the “ongoing issue… with negative attitudes toward podfic.”

With efforts by podficcers to gain more acceptance within the greater fandom community, a chance to make a space for themselves on Fanlore could be a huge step in the right direction.

If they can keep detractors from editing them out.