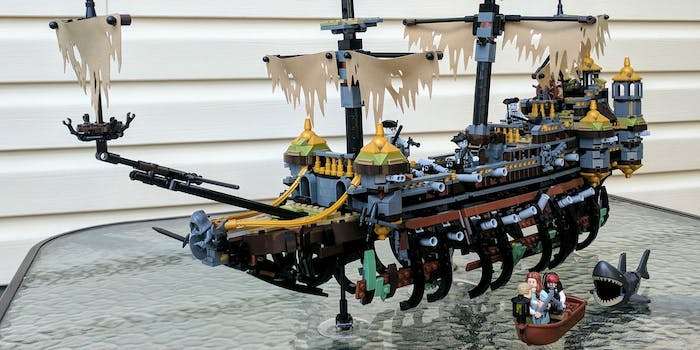 The new Pirates of the Caribbean is bad. But what about the Lego ship?

The new Pirates of the Caribbean: Dead Men Tell No Tales movie is officially the worst reviewed entry in the Johnny Depp-led franchise, and its associated Lego set is much in the same vein.

It’s not that the Lego Silent Mary, a giant, 2,294-piece pirate ship, is a bad set per se, but just like the movie it features in, it’s pretty shaky—literally.

The Silent Mary cuts an impressive profile, no doubt, but everything about it feels like it’s ready to fall apart. It’s an admirable quality in the realism department, considering it is based on a dilapidated ghost ship that appears to be one gust of wind away from crumbling into the ocean, but that also means it’s hard to handle in real life.

Case in point: The Lego ship’s central mast can topple over with just the slightest movement. It isn’t built into the deck itself, but instead sits free-floating on a fulcrum that will doubtlessly become looser over time.

It won’t be too long, I would guess, before the mast is unable to stand upright beneath its own weight at all. It’s similarly difficult to pick up the Silent Mary because of its rib-like sides. Designed to look like a decaying ship’s hull, there’s no real surface to plant your fingers on, and it’s hard to wrap them around to the model’s underbelly.

The result is that you’re likely to break off bits of those ribs or the deck whenever you try to move the model.

The ship also features a hinge built into its deck, which allows the front bow to bend upwards to simulate the vessel buckling from oncoming waves. It’s a nice touch of added playability, but a self-defeating measure since only a brave soul will actually attempt it. Lego pieces will inevitably go flying.

That’s not to say the Silent Mary doesn’t have its merits. For one thing, the $199 set is big. I mean, it’s huge. It’ll take up a shelf or mantle-top on its own, and because it’s a pirate ship, it almost looks like a classic tall ship model you might find decorating the study of some Victorian mansion.

Onlookers will need a double-take, at least, before realizing it’s actually a Lego set.

The Silent Mary is also a fun build. The under-hull uses many Technic elements to form a solid base, while the decks themselves are varied in both pieces and colours. The aftercastle—the large cabin at the back of the ship—is particularly challenging, thanks to its ornate and detailed turrets.

The Silent Mary is also a treat for mini-figure fans, with seven highly detailed characters from the movie. There’s Depp’s Captain Jack Sparrow, of course, and his sidekicks Henry and Carina, played by Brenton Thwaites and Kaya Scodelario in the film, respectively.

Javier Bardem’s Captain Salazar, the “greatest pirate hunter to roam the seas,” according to the instruction booklet, is backed up by Lieutenant Lesaro and Officers Magda and Santos, all of whom are in various states of undeath.

The best parts are the dual sharks that attach to the ship’s underbelly. If you raise the ribs, you can drop them down to chase after Sparrow and crew in the included rowboat, like some sort of carnivorous torpedoes.

All told, the Lego Silent Mary is more of a model than it is a toy. That’ll probably do for builders who just want something cool to put together and display, but for those who want a set to handle, this is one that has a lot of shiver to its timbers.