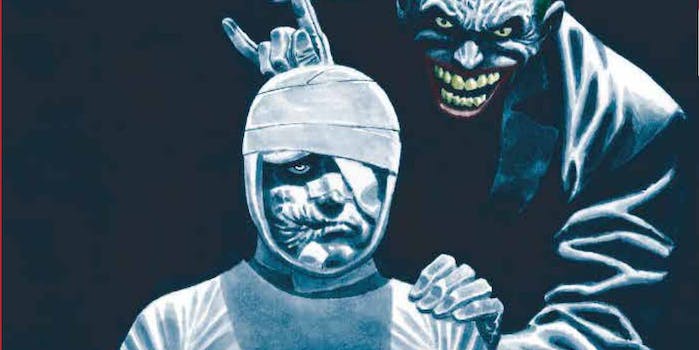 Best known as the co-creator of Harley Quinn, Paul Dini has had a prolific career writing for beloved superhero cartoons including Batman: The Animated Series, Justice League, and Ultimate Spider-Man, along with several DC comics.

His latest graphic novel features DC icons like Batman, Harley Quinn and the Joker, but it’s a great deal more personal than his previous work. In collaboration with artist Eduardo Rissi, Dark Night: A True Batman Story is a memoir about the darkest period in Dini’s life, and how Batman helped him to recover from trauma.

While writing Batman: The Animated Series in 1993, Dini was attacked while walking home at night, suffering serious injuries. Dark Night: A True Batman Story looks back on the attack and its aftermath, as Dini was dragged down by depression and self-loathing. 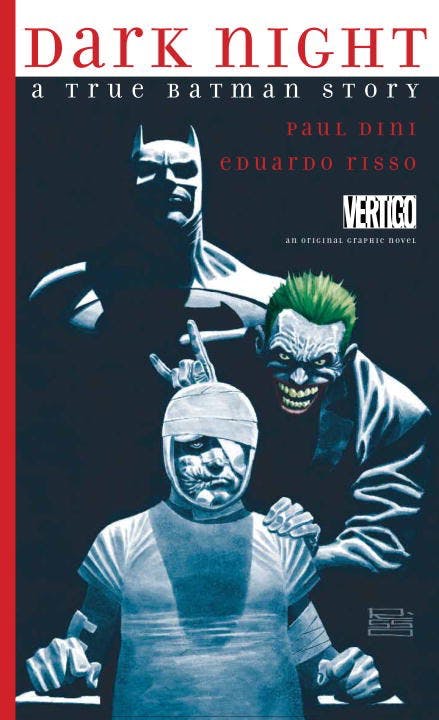 As well as being a moving depiction of trauma and recovery, Dark Night tells a story that could only belong to someone who spent his life immersed in the world of comics. Brought to life by Eduardo Risso’s gloomy, evocative art, characters like Batman appear alongside Dini as real-life companions, commenting on his experiences and offering advice (or in the case of the Joker, vicious taunts.) The resulting graphic novel is a unique blend of personal memoir and a manifesto for the life-changing influence of superhero comics.

Speaking with Dini in a phone interview, we discussed the book’s background, its influence on Dini’s recovery process, and how DC Comics characters still factor into his everyday life.

Dark Night: A True Batman Story will be published on June 21.

How long have you been thinking about writing this book? Was it difficult to work on, or was it more a case of thinking, at this point in your life, “it’s time?”

It really has been stewing in my brain for the last 23 years, ever since the incident. Even late that night I was thinking like, oh, I’ve gotta do something with this. I’m gonna put this away and someday, somehow I‘m gonna write about this.

It’s something that happens and it doesn’t really go away.

It’s something that happens and it doesn’t really go away. You always flash back in your head, and in my case I thought, well, at some point I’m gonna figure out how to talk coherently about this. And after 23 years, I figured out, I think this is the way to tell the story.

Yes I do. I feel like the incident will always be there, but I’ve moved beyond it in a lot of ways. The fact that it exists now in book form is something I can just put on the shelf and walk away from. And it’s there for anybody else to discover if they’ve gone through something like this. 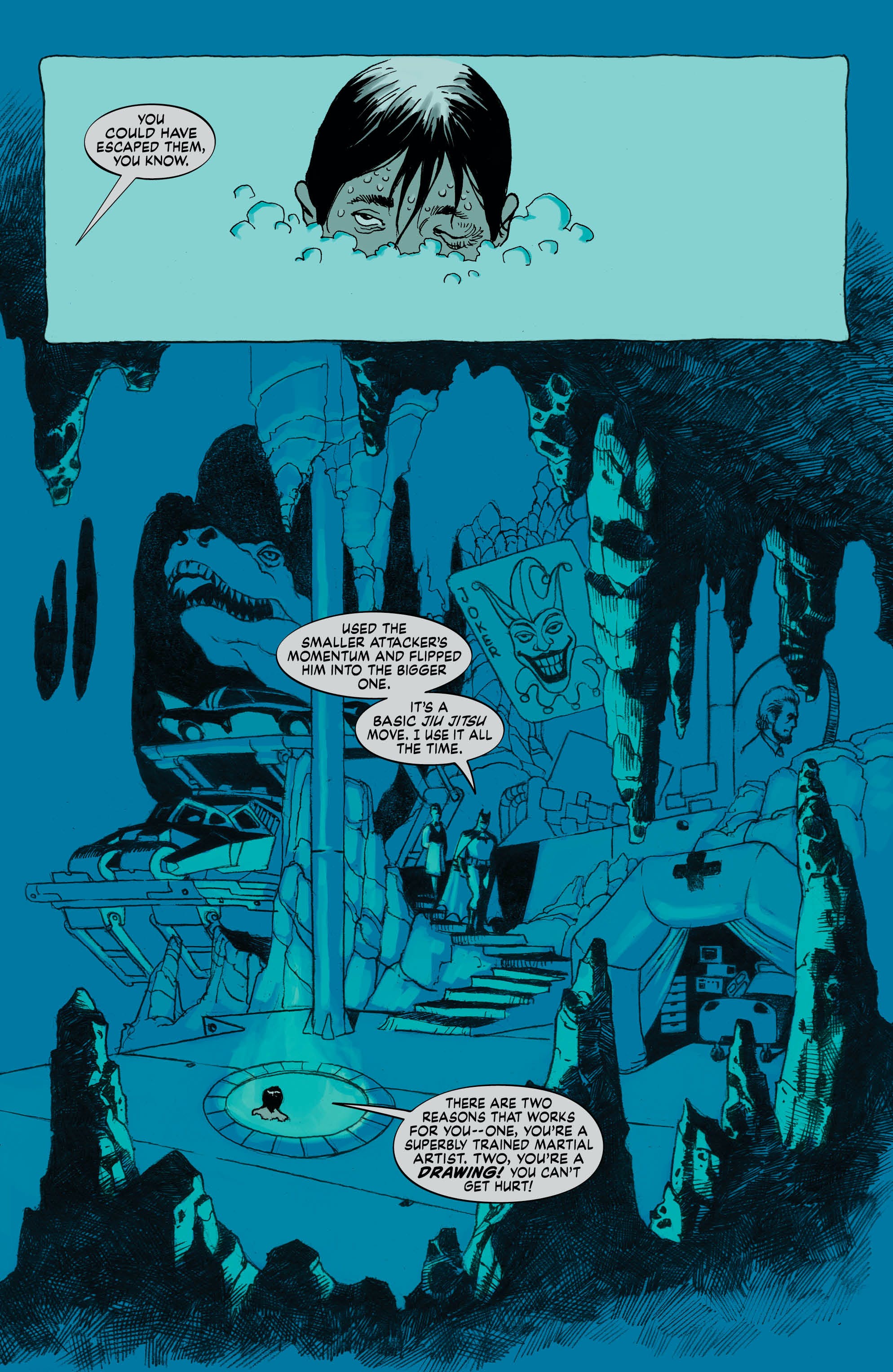 How did you pitch the book to DC? Because obviously it’s this really interesting personal concept, but it’s not something that could happen without permission to use the Batman characters.

I sort of talked about it here and there with folks at DC, and I was in a meeting with Dan DiDio and Geoff Johns about four years ago. I said that this was something that had been in my brain for some time now, and I wasn’t exactly sure how to tell the story. But I felt there was something there, as a personal account.

One of the books that convinced me it was possible to tell a story like this was Steve Seagle’s It’s a Bird, where he was going through a situation with his mother getting cancer. I felt like if you’re up for telling another story like that, maybe with a Batman angle, here’s a real-world story that resonates with me, that comes from my experience. And Dan and Geoff sparked to the story very much, they liked the idea.

Dan really encouraged it to be a Vertigo book, he felt it was the sort of Batman-type story they could do under the Vertigo name and still have the quirky otherworldly quality that Vertigo has.

In the book you depict a period when you’re trying to recover, when you’re struggling with feelings of self-loathing reflected by Batman villains. When you look back at your work from that period, do you see a drastic change in the type of stuff you were doing creatively?

I feel like it maybe gave my work a bit more empathy, a bit more sensitivity in a lot of ways.

I feel like it maybe gave my work a bit more empathy, a bit more sensitivity in a lot of ways. My emotions were very close to the surface during that time. And the more I examined my emotions, the more I was able to put that in my writing. I wanted to concentrate more on human emotions and internal feelings in the characters, inasmuch as I could in an animated cartoon show—ostensibly one for a young audience.

There were times when I felt I couldn’t put the depth of feeling that I wanted to in the cartoons at that time, because it’s for kids and you have to keep it kind of upbeat. But I did it where I could. And I put it in my other work as well, when I was writing things like comics and screenplays. 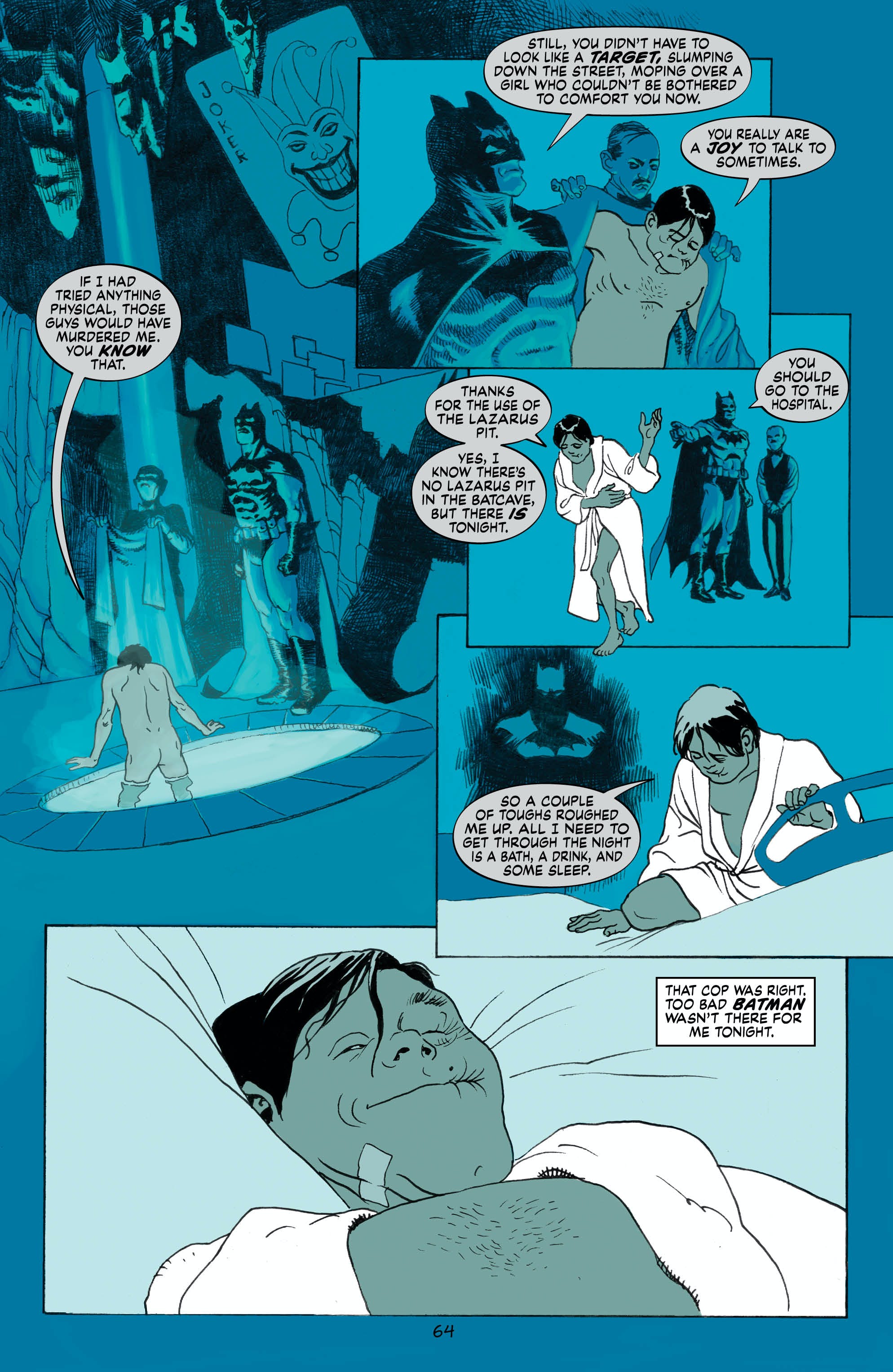 Shortly after the incident, Bruce Timm and I sat down and did the Mad Love comic, and I think a lot of what had been whirling around in my brain, as far as emotional depth and empathy toward violence, went into that story. So, you know, Harley’s plight is a little more realistic because I’d gone through some elements of that myself. I also developed the theory around then that I kept close to my heart, that a story has to either make me cry or laugh, or else I start again.

One thing that surprised me about this book is that it’s more of a full-life autobiography. You begin with this period as a child, and it seems from the way that you illustrate it, that you retained the strong imagination that most people lose in childhood. Do you still have these conversations with characters now? Thinking, “What would Batman do?” in certain situations?

Oh, yeah. I mean, the characters are never far from my brain, and you know, they pop in—largely when I’m writing them. Yesterday I was writing a little argument, a little exchange between Harley Quinn and Poison Ivy, and I could just imagine them standing next to my desk and arguing. And it’s like, “OK, OK, what did you say? All right, go back, Harley, I’m gonna write that down.”

It’s just my process. I’m a very visual thinker, so the characters are running through my head, doing what they’re doing when I’m writing them. And there’ll be moments where I’ll just kind of throw a look off to the side as if I’m talking to one of the characters. It’s always been something that I’ve had with me since I was a little kid.

With Suicide Squad coming out later this year, how do you feel about Harley Quinn getting this live action adaptation?

I feel great that the character has endured over the last 25, 26 years, and has become really popular. She was popular when she first showed up in the Animated Series, and then it’s like another generation has grown up with her and really embraced her. I mean, she doesn’t look the same as she does in the Animated Series, but she still seems to be the same Harley from what I’ve seen. I’m just glad the character exists in some form or another, after so much time. And I think the fact that other people have taken her and done different creative things with her, it just makes me feel good.

It just makes me feel fun and happy to know that some version of the character exists and is up there onscreen. I look at the Marvel movies and the DC movies, and various creators’ creations, and i think, you know, that’s really pretty cool.