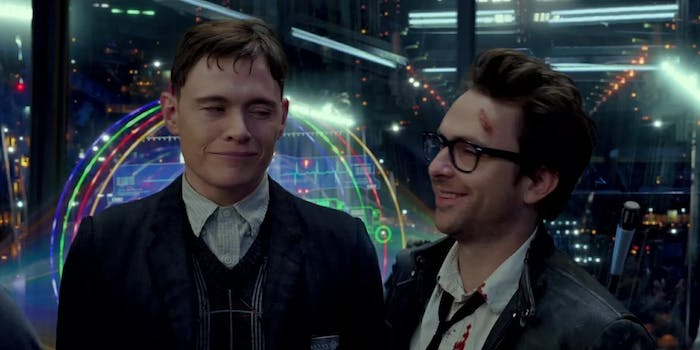 He says his character is in love with the scientist Herman Gottlieb.

There’s a fine line between queerbaiting and respectfully acknowledging a same-sex fanfic ship, and Pacific Rim actor Charlie Day just trod that line like a pro. In a red carpet interview for Pacific Rim: Uprising, he confirmed that fanfic sincerely informed his performance.

Charlie Day plays Newton Geiszler, a biologist with an overzealous interest in kaiju. He’s one half of a double-act alongside mathematician Hermann Gottlieb (Burn Gorman), as frenemies who perpetually rub each other the wrong way. Gottlieb is a stuffy academic while Geiszler is a loose cannon, but they have to work together to save the world. They’re also one of the most popular romantic pairings in Pacific Rim fandom.

At the Pacific Rim: Uprising premiere, Charlie Day explained how Newton Geiszler fared in the years between movies. “He’s been separated from Hermann, so he’s kind of not himself, he has no one keeping him real. And he misses the man that he’s in love with.”

“People have been shipping it, but I think they’re totally right,” Day said. “It completely informs the character. I honestly was thinking about it that way when I was acting through those scenes, and it’s so much more interesting. So thank you to the fans for writing along with the writers.”

Here's Charlie Day addressing (read as, confirming) Newmann at the Pacific Rim Uprising red carpet. My perpetual mood is Charlie saying the words "He misses the man that he's in love with" and then proceeding to thank fans for creating content lol pic.twitter.com/sWHsmZkA1c

A lot of actors don’t know how to discuss shipping in interviews, especially when it comes to same-sex pairings. Some treat it like a joke or are openly annoyed (like Martin Freeman in Sherlock), while others go too far in the other direction. There’s an overlap between shipping and a desire for queer representation, and when creators encourage fans without delivering the goods in canon, it’s seen as a cynical move: queerbaiting.

Charlie Day’s comments earned a positive response from Pacific Rim fandom because he treated fans with respect. He thanked them for creating something that made his character more interesting and agreed the pairing made sense in context. It sounds like he intentionally played his character as being in love with Gottlieb, something he discussed in a previous interview with Nerdist.

Of course, this doesn’t mean we can unroll the congratulations banner for Pacific Rim: Uprising just yet. Director Steven DeKnight already said there aren’t any “overtly” queer characters in the film, meaning Gottlieb and Geiszler’s sexuality remains in the same realm as Kate McKinnon‘s character in Ghostbusters. It’s all in the subtext. We still haven’t seen a mainstream, PG-13 blockbuster with LGBTQ characters, and when filmmakers want to make this kind of creative choice, they have to sneak it under the radar. That’s pretty embarrassing for 2018, but on the bright side, at least actors are learning to take the issue seriously.