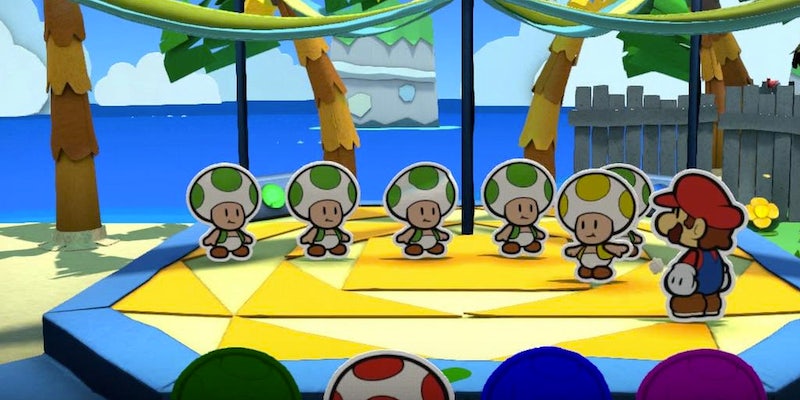 Did Nintendo make a Gamergate reference in a new Paper Mario game?

Indie game developer Zoe Quinn—the first and most pronounced target of Gamergate—is among a number of people who think they’ve spotted a joke at her expense in a new Nintendo game.

Paper Mario: Color Splash is in development by Nintendo, which demoed the game during a Nintendo Treehouse Live stream at E3 last week. Some dialogue that popped up during a minigame being played for the livestream audience is being interpreted by Quinn and others as a Gamergate joke.

A group of dancing Toads are referred to as “five fun guys,” which critics are calling a reference to the “Five Guys Burgers and Fries” meme that is part and parcel of the Gamergate movement. When Mario catches the head Toad cheating during a game of shuffle, the Toad says, “Man, is this going to ruin my career?! I can see the headline now: ‘Shufflegate: Exposed!'”

Nintendo has a video recording of the livestream on its official YouTube channel. The Shufflegate comment takes place at 23:22. 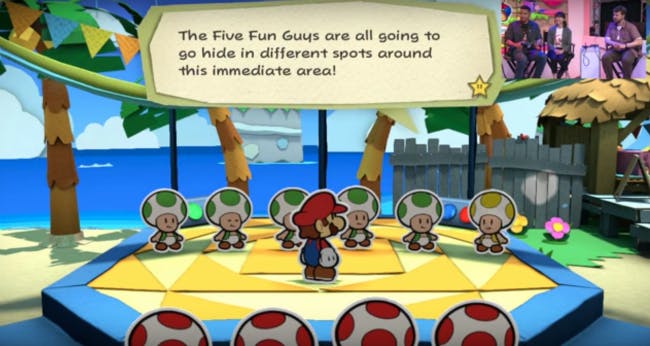 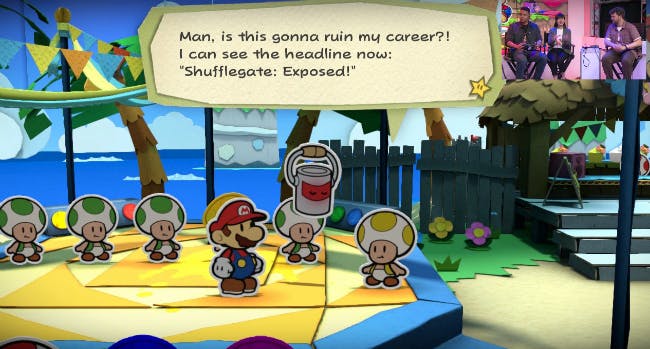 While it’s possible the references to “shufflegate” and the five fun guys are an unfortunate coincidence (they could just be five fungis, after all), some are calling it out as an insensitive joke.

A story about the dialogue appeared on June 15 on One Angry Gamer, and Quinn publicly decried it on Twitter on Wednesday afternoon.

This of course was picked up on almost immediately by members of the video game press.

As Paper Mario: Color Splash is developed by a Japanese game studio, all dialogue in the English version would be localized by Nintendo’s Treehouse team.

Nintendo acknowledged receipt of the Daily Dot’s request for comment about the dialogue in the game. This story will be updated with a statement if and when Nintendo releases replies.

Updated June 23, 8:54am CT: Nintendo responded with the following statement.

As many have observed, when viewed in its entirety the Nintendo Treehouse: Live segment for Paper Mario: Color Splash from E3 includes two jokes separated by commentary and gameplay that have no relation to each other. One joke has to do with Watergate, while the other is a nod to the Fungi Fun Guys from Mario Party 8. It was brought to our attention today that these two jokes have been spliced together and misconstrued as a crude reference to an online hate campaign. While we typically do not speak on localization matters, we feel the need to confirm that these jokes are not linked in the game and were never intended to be linked. Nintendo firmly rejects the harassment of individuals in any way and was surprised to learn that its gameplay was misinterpreted in this manner. – Nintendo of America

Correction: A previous version of this story failed to include Gita Jackson as a member of the video game press.