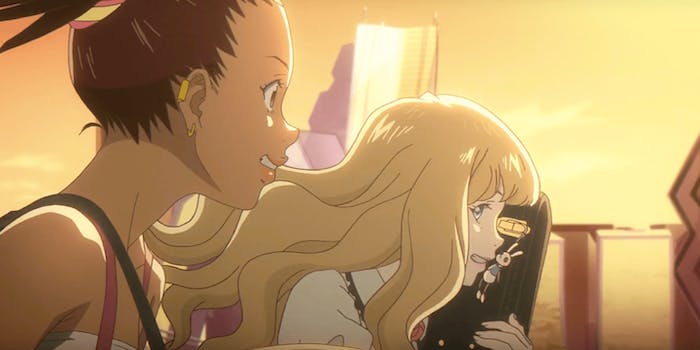 ‘Carole and Tuesday’ is a feast for the eyes, ears, and heart

The Netflix musical anime gets off to a wonderful start with show-stopping musical numbers and lovable characters.

While watching and reviewing Carole and Tuesday, the delightful new musical anime now streaming on Netflix, I made an amazing discovery: The show’s entire soundtrack is available for streaming as well. After months of watching videos of the show’s musical sequences and loving every single one, I get to see them in their original context and listen to them whenever I want? Score!

Carole and Tuesday takes place in the not-so-distant future, 50 years after Mars has been colonized. Tuesday, an affluent teenager, runs away to Alba City, the largest city on Mars, with nothing but a single suitcase and her Gibson acoustic guitar. There, she encounters Carole, a keyboard-playing busker who has been on her own for as long as she can remember. Tuesday is entranced by Carole’s wordless song, and the two go back to Carole’s apartment to play together.

While anime has many talented directors, Carole and Tuesday’s chief director, Shinichiro Watanabe (Cowboy Bebop, Samurai Champloo), has a few distinctive gifts. The first is how he make his worlds feel not only plausible, but lived-in. Life on Mars looks pretty similar to modern life on Earth, but with a few neat innovations and warm, natural light. Both the main cast and crowd scenes portray humanity in all its colorful glory, with diverse skin tones, body types, and styles.

Watanabe’s second gift is incorporating equally diverse music into this universe, which, considering the show’s subject matter, is essential to its success. In this vision of the future, most art is algorithmically generated by AI, with very little written by actual humans. This isn’t as doom and gloom as it sounds; after all, the AI are still programmed and run by humans, and most of the music is listenable. The latter half of the 12 episodes Netflix has released so far—which only make up the first half of the series—features a show similar to American Idol or The Voice, incorporating a huge variety of music, from an opera/gangsta rap hybrid to a barbershop quartet number with lyrics consisting almost entirely of swear words.

All these contrasting styles serve as musical foils to the titular duo’s stripped down, singer-songwriter style. The other music may be fun, unique, or even moving, but none of it has the warmth or authenticity of Carole and Tuesday’s gentle vocals and acoustic strums. In the end, the show doesn’t condemn highly produced pop music in favor of more intimate or lo-fi tunes, but makes the case that both should exist.

While the music competition arc puts an appealing variety of musical numbers on display, the season’s first half is easily the stronger part. History has proven that musical duos don’t need to get along to produce beautiful art (just look at Simon and Garfunkel), but Carole and Tuesday connect personally as well as artistically. Although their backgrounds are totally dissimilar—Carole is an orphaned refugee who spent her childhood in group care, Tuesday the daughter of a wealthy political family—they find common ground in their loneliness and isolation. As their connection strengthens, the lyrics they write together become more joyful and less melancholy.

Carole and Tuesday is still lovely to watch even when its characters aren’t singing. The titular duo forms a lovely dynamic, and the show avoids leaning too heavily on the differences in their upbringings. Yes, Carole grew up on her own and Tuesday is sweetly naive, but there’s much more nuance to their characterization than one would expect, given the situation. The script emphasizes their commonalities more than their differences, making them feel more connected than the typical television odd couple.

The main cast is rounded out by the duo’s manager, Gus, who washed up years ago but is fired up again by his clients’ potential; and Roddy, the sound technician who posted their first guerilla performance on social media. Even if they don’t agree all the time, the group is sweetly supportive of each other, a balm against the often cruel, unforgiving music business. Finding an audience and supporting oneself through music is an uphill struggle, after all; why add group dysfunction into the mix? All of the main characters still make mistakes, clash over opinions, and experience the typical ups and downs of human interaction, but in the end, they still care for one another.

Their real foil is Angela, a former child star trying to transition into a singing career before she ages out of the entertainment business. This drive comes partly from her overbearing mother, who was also a child actor but failed to cross over into adult success. Angela’s songs are written and composed by an AI programmed by super-producer Tao, who coldly asserts AI’s superiority over human efforts. Angela is petulant, isolated, and lonely, lacking any sort of strong bonds in her life. Even though she’s not especially likable, she’s still sympathetic, because it’s clear to see what made her this way.

Carole and Tuesday isn’t flawless; the pacing is a bit wonky, with half of its first 12 episodes devoted to the singing competition. Its biggest flaw, however, is in its approach to LGBTQ representation. It seems sincere in its intent, wanting to treat them like characters instead of caricatures or jokes, but doesn’t quite know how to do it well. The show has a number of visibly queer characters, including Gus’s ex-wife and her fiancee, but most of them seem to embrace hurtful archetypes, such as a lesbian with an obsessive and dangerous crush on Tuesday. It’s mild enough to induce a sigh rather than ruin the show, but it’s still time to move past these tired tropes.

It’s going to be hard waiting for Netflix to release the second half of Carole and Tuesday. This first batch of episodes is just so lovely, kind and gentle and pointed and entertaining all at the same time. I want to see this “seven-minute miracle” that Gus talks about in the intro to every episode. But until then, I’ll just listen to the soundtrack on repeat.