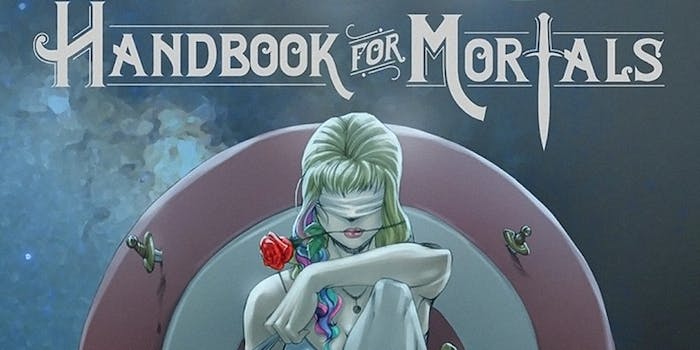 Did the mysterious fanfic author behind ‘My Immortal’ just resurface?

This is the fanfic equivalent of a surprise message from reclusive 'Catcher in the Rye' author J.D. Salinger.

Handbook for Mortals provided one of the juiciest internet dramas of 2017, and the latest update ties into a decades-old mystery: the secret authorship of the “worst fanfic ever,” My Immortal.

Handbook for Mortals is an indie-published fantasy novel that appeared out of nowhere, reaching the top of the New York Times YA bestseller list before being revealed as a scam. Someone had placed bulk orders to ramp up the book’s sales, seemingly trying to land a movie deal so the author could write and star in the adaptation. It’s now clear that vanishingly few people ever bought or read this “bestseller.”

One week later, Handbook for Mortals is still experiencing the “fall” part of its epic rise and fall. And thanks to all that unwanted attention, people began to point out some intriguing comparisons. Apparently, Handbook for Mortals bears a startling resemblance to the infamous Harry Potter fanfic My Immortal.

Packed with misspellings and wildly out-of-character dialogue, My Immortal stars a teen goth vampire named Ebony Dark’ness Dementia Raven Way who attends Hogwarts and strikes up a romance with Draco Malfoy. While other mid-2000s Harry Potter fanfics faded into obscurity, My Immortal‘s cult status only grew. It inspired an in-depth Vulture profile in 2015, and a webseries adaptation in 2013. An entire generation of fanfic fans would love to know the whereabouts of My Immortal‘s mysterious author “Tara Gilesbie,” and thanks to Handbook for Mortals, that may finally have happened.

In an unexpected update on Fictionpress, My Immortal’s (supposed) author wrote:

“Because I’ve received several messages asking this, and predict I may receive more, I’ll answer it here. No, I am not [Handbook for Mortals author] Lani Sarem. Really bad fiction simply tends to read the same. No, I’m not on Facebook. Or Deviantart. Or MySpace. Or Youtube. (Etc.) I am on Tumblr. But I use my real name there, and it’s not Tara.”

This follows another brief update posted on Aug. 2, which flew under the radar until Handbook for Mortals reawakened people’s interest in Tara Gilesbie. For anyone out there who isn’t familiar with My Immortal‘s cult following, this is roughly akin to J.D. Salinger launching a public Twitter account.

If true, these updates confirm one of the more popular theories about My Immortal‘s author: that she was a Hot Topic-era teen goth when she wrote her magnum opus, and has since matured into an adult with a sense of humor about her internet infamy. We’re reaching out to “Tara” for an interview, but fans will be relieved to know we may never know the real truth. It will be hard to verify if this is the original author, and many people still believe that My Immortal was a hoax or parody of bad fanfic at the time.

Either way, there’s a heartwarming end to this tale. Someone was very, very keen to distance the artistic purity of My Immortal from the scandal surrounding Handbook for Mortals, meaning that My Immortal‘s legacy remains—in its own weird way—unscathed.