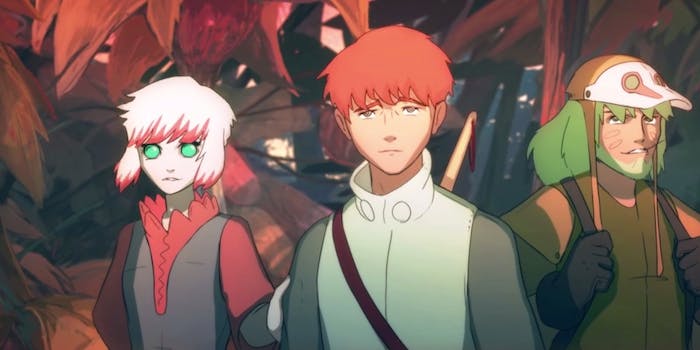 Hayao Miyazaki fans are in love with this animated student film

This French animation student's homage to Studio Ghibli is stunning.

Gwenn Germain spent five months toiling alone in his room over his senior animation project at the French art school Créapole. But it was worth all the effort: After his gorgeous homage to Hayao Miyazaki went viral in Japan, he’s gotten an A+ on the project from the Internet.

Titled “Celles et Ceux des Cimes et Cieux,” or, “Girls and Guys from Summits and Skies,” the two-and-a-half-minute short has a story that’s reminiscent of Miyazaki films like The Secret World of Arietty, My Neighbor Totoro and Princess Mononoke. Translated from Germain’s description on Vimeo, the pitch is: A young boy who lives in a village that’s perched on a giant tree falls into the depths of the forest one day, where he meets two forest-dwelling strangers who help him return home.

At least, that’s the outline. But as you can see, there’s a lot more of Miyazaki’s Studio Ghibli in this beautifully done film than just the plot.

We spotted endless references in this short, from iconic images from Mononoke, fantasy creatures from Spirited Away, visual homages to Howl’s Moving Castle and The Wind Rises, and many more. Even the music feels like the score to a Miyazaki film, because it practically is—Germain uses excerpts from the score for the film Hana-bi, which was composed by legendary composer and longtime Miyazaki collaborator Joe Hisaishi.

RocketNews24 notes that the film has caught on like wildfire in Japan, for obvious reasons. Germain also cites influences like conceptual artist and designer Syd Mead, who worked on Blade Runner and Tron, among other things. But with Miyazaki himself showing up in the final moments of this film, it’s clear what Germain intends to homage.

We can’t help thinking that with so much of Miyazaki’s creative output dedicated to exploring the lives and adventures of female heroines, it would have been nice to have seen more emphasis on that part of his legacy in this short.

But for a student film this is really remarkable and deserves all the praise. You can also see more of Germain’s concept art on his Deviantart page. And here’s another short animation he made last year starring two parrots:

Not bad for someone who hasn’t even left school yet. We can’t wait to see what Germain does next.