Build your own MCU with these 10 amazing Marvel Lego sets

Love Marvel and Lego? Here are the Marvel Lego sets that offer the best of both.

It’s hard to remember a time when there wasn’t a whole slew of Marvel Lego sets out there, but amazingly, the toy maker has only had the official license since 2012.

Marvel’s forays go back as far as 2003, when the first sets were released to tie into the 2002 Spider-Man movie, but it wasn’t until Disney started seeing mega-success with its Avengers characters that the toys started arriving in significant numbers.

Since then, fans have been hit with a veritable flood of Marvel superhero Lego sets. In the interest of separating the best from the rest, here are the top Marvel Lego sets ranked by awesomeness—plus one that never actually saw the light of day.

The X-Men Mansion, formally known as the Xavier Institute for Higher Learning, has never been made into a proper Lego set, but it did come close—sort of. In 2014, two individuals known as DarthKy and GlenBricker submitted a build of the X-Mansion to Lego Ideas, the Danish toy maker’s crowd-sourcing platform that sometimes takes suggestions from the public and turns them into products. Sets based on Doctor Who, Ghostbusters, and even The Big Bang Theory started out as this way. The X-Mansion reached the requisite 10,000 support votes needed to be officially considered by Lego, but it was ultimately turned down. Lego didn’t give an official reason, but one look at the designers’ mockup photos and it’s pretty obvious. The set would have been massive, with thousands of pieces.

Of the two Iron Man Hulkbuster sets releasing this year in conjunction with the upcoming Avengers: Infinity War movie, the Ultron Edition is easily the cooler one. For one thing, it’s a lot bigger—1,363 pieces, compared to the 375-piece Hulkbuster Smash-Up set—which means it’s a lot more detailed and imposing. The bigger set, which also comes with an Iron Man mini-figure that can pilot the larger armor, is designed in the vein of Lego’s Ultimate Collectors series, meaning it’s more of a model than toy. That said, the playability-minded won’t be disappointed thanks to a detachable jackhammer arm, glow-in-the-dark elements, and a working chest light.

Another new set, the updated version of Doctor Strange’s New York brownstone is an instant classic. With three levels and 1,004 pieces, it’s much bigger than the simple Sanctorum set released in 2016, which was basically just a single room with some tentacles coming out of the wall. The new building has a pizzeria, two fire escapes, a rooftop water tower, and an apartment for Peter Parker. Tying into Avengers: Infinity War, Thanos’s Black Order is also represented via an Ebony Maw mini-figure and Cull Obsidian big figure. On the Avengers side, there’s Doctor Strange himself, of course, Iron Man, and a tentacled Iron Spider-Man. As usual with licensed sets that hit stores before a movie, that last mini-figure is probably a bit of a spoiler.

A Lego set can be great for a number of reasons: size, faithfulness to source material, playability, and so on. The Avengers Quinjet City Chase qualifies because of how many nifty features it packs into a relatively small, 722-piece set. As in the Avengers: Age of Ultron movie, the jet houses a concealed compartment—lower the ramp and out pops Captain America on his motorcycle. There’s also a hiding spot under the wings for Black Widow, who can swing down on a rope, as well as a rear hatch for hiding Iron Man. That’s a pretty efficient use of space. A lab truck with the Vision inside and a requisite Ultron mini-figure cap off what is ultimately a complete-but-compact Lego Avengers package.

The Final Showdown between Spider-Man and his arch-nemesis the Green Goblin, based on the original 2002 Spider-Man movie, belongs on this list by virtue of being a progenitor to the current slew of Lego Marvel products. The 360-piece set, which features Spidey and the Goblin duking out over a New York City bridge, seems a bit primitive by today’s standards, but it was groundbreaking in 2003. That’s because it was one of the first times collectors could get their hands on official Marvel mini-figures. Fortunately for fans, this was just the first of many, as Marvel chose to continue promoting and licensing Spider-Man Lego sets despite not owning the movie rights.

Considering Spider-Man is Marvel’s longest-running property with Lego, it’s no surprise that many of the comic company’s best sets feature Spidey. The 476-piece Daily Bugle Showdown is also one of those increasingly rare Marvel sets that isn’t related to a movie, which is obvious given the mini-figure roster. Aside from Spidey and J. Jonah Jameson, there’s Doctor Doom, Nova, and the Beetle. Even the most creative writer would have difficulty tying that cast together into a cohesive story. Add in a dumpster, an exploding window, a rooftop trapdoor, and a jet helicopter, and any kid is going to have hours of fun coming up with wacky scenarios. It’s a good way for budding young comic book writers to get their start. 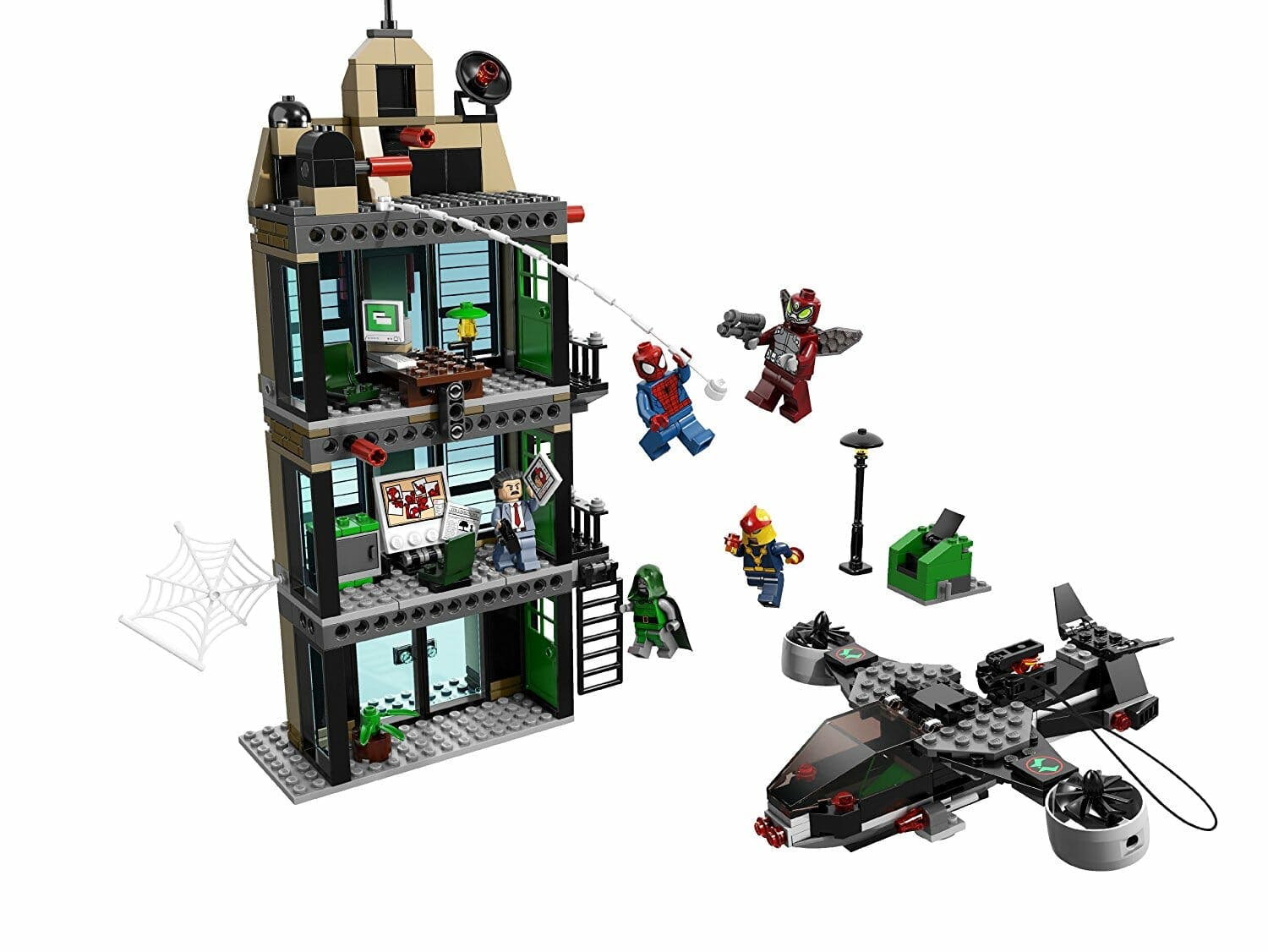 The X-Men have languished as far as Lego is concerned, thanks to their film rights being controlled by 20th Century Fox. Marvel sold those rights, along with the Fantastic Four and Spider-Man, to Fox and Sony, respectively, decades ago when it was in dire financial straits. With Marvel Studios, now owned by Disney, coming to dominate the box office over the past decade, it opted not to promote competitors’ movies, hence the scarcity of licensed toys and other marketing efforts. That’s why there have been virtually no Lego X-Men products to speak of, aside from this set and Wolverine’s Chopper Showdown in 2012. If you’re looking for Magneto, Storm, and Cyclops mini-figures, this is the only place to get them all in one set. Of course, that may change now that Disney has acquired the X-Men rights with the acquisition of Fox, but we’ll have to wait and see.

No, this isn’t a set that depicts out-of-work auto-plant workers. Rather, it’s one of Iron Man’s newer foes come to life, or rather, to Lego. In the comic books, the Detroit Steel battle armor is created by Justine and Sasha Hammer in an attempt to get revenge for the death of their family patriarch, Justin. The suit is piloted by a number of different individuals, but here in Legoland, it’s Justin himself who dons the purposely patriotic armor. Lego mechs are always cool, so Detroit Steel is already neat. But, that’s not all: The set also comes with Agent Coulson and his flying S.H.I.E.L.D. car, Lola. And, oh yeah, there’s an Iron Man mini-figure too.

There probably hasn’t been a bigger spoiler in Lego history than the Super Hero Airport Battle, where the star attraction is the buildable Giant-Man figure. Tied to the iconic fight scene in Captain America: Civil War, but released before the movie, this 807-piece set completely gave away one of the key moments in that battle—when Ant-Man grows himself into Giant-Man for the first time on-screen. Despite the, ahem, big spoiler, the set itself is nevertheless cool because of the clever Giant-Man construction. There’s also a Quinjet and airport tower thrown in, plus Captain America, Winter Soldier, War Machine, Iron Man, Scarlet Witch, and Agent 13 mini-figures. As a final touch, there’s also an Ant-Man micro-figure.

If it’s playability you’re after, the Spider-Man Ultimate Bridge Battle can’t be beat. It’s big at 1,092 pieces and full of action-ready features, including a movable roadway, detachable suspension cables, and a secret lair. A taxi cab and police ATV are included, as well as a host of villain mini-figures. They’re all comic-book-based too, which means the original, purple-wearing Green Goblin—who comes with a mean-looking flaming pumpkin bomb and a sweet glider—as well as Kraven the Hunter and Scorpion with his articulated tail. Spidey gets some allies in the form of the Scarlet Spider and Spider-Girl. Action sets aren’t any fun, though, without someone to put in peril—enter the Aunt May mini-figure. Spidey purists will be pleased since it’s the old Aunt May from the comics, not the sexy Marisa Tomei version from the latest film.

What the Death Star is to the Lego Star Wars line, the S.H.I.E.L.D. Helicarrier is to the Marvel series. It’s the ultimate set that gets fans drooling. With 2,996 pieces that assemble into a nearly 3-foot-long model, complete with four working rotors, it’s quite simply a mammoth creation. The carrier itself is built to a larger scale than regular Lego models, so it’s staffed by a group of S.H.I.E.L.D. and Avengers micro-figures. But mini-figure fans also get a decent assemblage with Hawkeye, Maria Hill, Nick Fury, Captain America, and Black Widow, complete with their own S.H.I.E.L.D. eagle display stand. And for collectors who want the complete experience, there are separately sold upgrades that add working lights and automatic rotor functions.