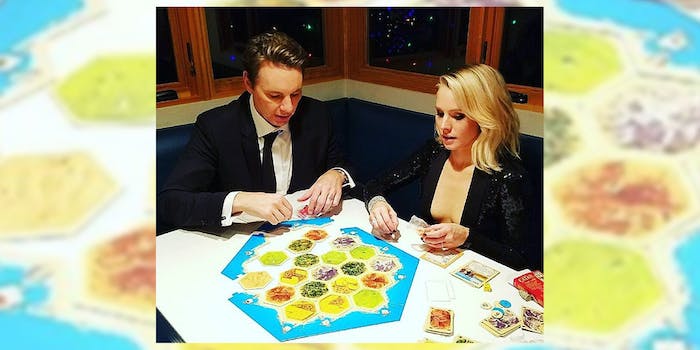 The afterparties are almost as much a part of the award show circuit as the ceremonies themselves, but Kristen Bell and Dax Shepard had a perfectly good reason to skip out on the Golden Globes post-awards festivities.

In a red carpet interview prior to the Golden Globe awards ceremony, Bell and Shepard revealed their post-show plans. They had much different party lined up, but one that looked every bit as fun as the rest of them.

The interviewers couldn’t quite believe that Bell and Shepard would actually spend their nights playing a tabletop game in their pajamas, but they were adamant as they gushed about the game—and shared it can get pretty intense.

“It causes riffs, it’s broken friendships,” Bell said. “We fight when we play it.”

And while Bell and Shepard may have nixed the onesies (this time), they were settled into their game of Settlers of Catan almost as soon as the Golden Globes ended.